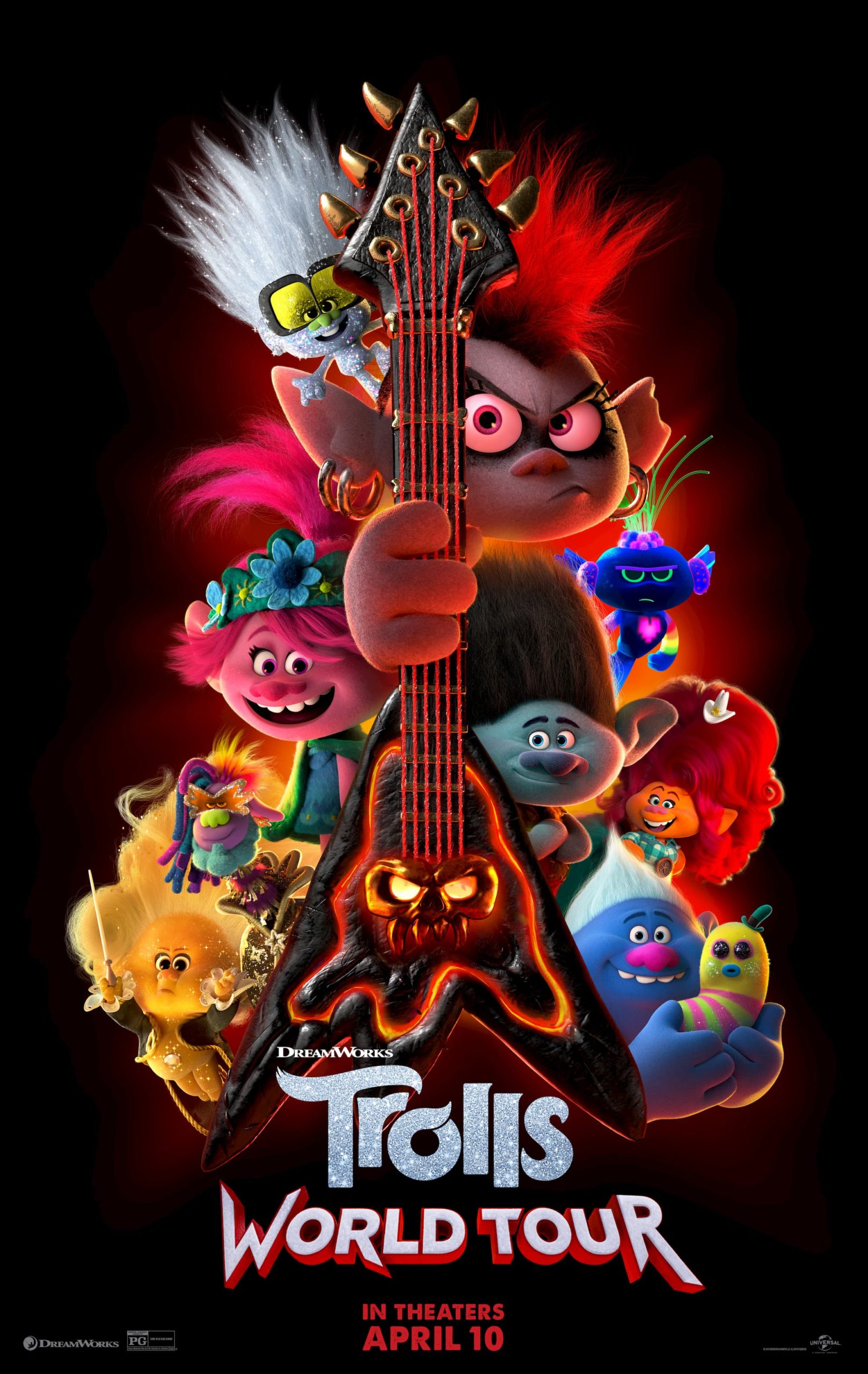 The animation for Trolls World Tour is the same as the first Trolls movie. Which I loved. I love the scrapbook felt look and how they translate that to the Trolls world. I loved the choices for the new trolls, and the Rock trolls are my favorite.

In the first Trolls movie, Anna Kendrick and Justin Timberlake did a phenomenal job, and the music was catchy. Years later my kids and I are still singing the songs. For Trolls World Tour it seemed as if the majority of the songs are remixes. There is no full song that sticks out to me except for Tiny Diamond’s little wrap, and my 4-year-old keeps saying “Who let the dogs out?”. Haha! So, I am a little let down by the music, but the music will get you on your feet dancing.

As for the story, my first thought was that the story was just like the first one, but with little tweaks, and that Poppy and the Pop Trolls didn’t learn a dang thing from the first movie. (It was actually a little frustrating and left me missing the Bergens from the first movie. Haha!) The story was heartwarming and contained an important message, but it had so much potential to be more original it just didn’t get there.

I give Trolls World Tour a C+. Rachel Bloom as Queen Barb steals the movie, and of course, Anna Kendrick and Justin Timberlake as Poppy and Branch are as cute as ever. Kids will probably watch it over and over so since it costs $20 to rent the movie for 48 hours right now I would suggest waiting till it is available for purchase. (Usually around the same $20 range.)

Anna Kendrick and Justin Timberlake return in Trolls World Tour, an all-star sequel to DreamWorks Animation’s 2016 musical hit. In an adventure that will take them well beyond what they’ve known before, Poppy (Kendrick) and Branch (Timberlake) discover that they are but one of six different Trolls tribes scattered over six different lands and devoted to six different kinds of music: Funk, Country, Techno, Classical, Pop and Rock. Their world is about to get a lot bigger and a whole lot louder.

A member of hard-rock royalty, Queen Barb (Rachel Bloom), aided by her father King Thrash (Ozzy Osbourne), wants to destroy all other kinds of music to let rock reign supreme. With the fate of the world at stake, Poppy and Branch, along with their friends — Biggie (James Corden), Chenille (Caroline Hjelt), Satin (Aino Jawo), Cooper (Ron Funches) and Guy Diamond (Kunal Nayyar) — set out to visit all the other lands to unify the Trolls in harmony against Barb, who’s looking to upstage them all.

If you are looking for another movie to watch with your kids I highly suggest Abominable. You can click HERE for my spoiler-free review!