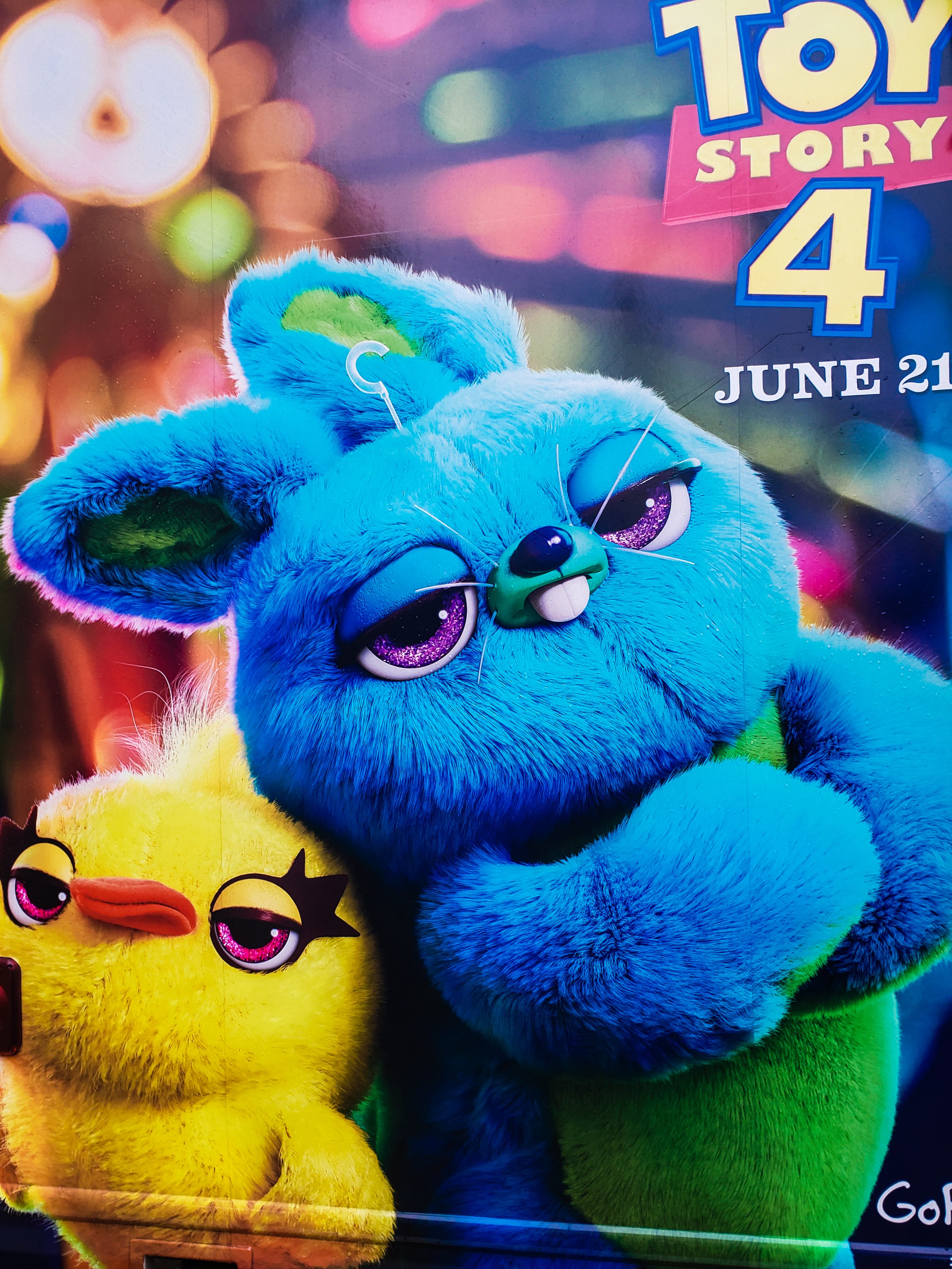 Growing Up with Toy Story

I don’t know about you, but I grew up with the Toy Story movies. Over a 24-year span I watched, and loved, the adventures of Woody, Buzz, Jessie, Bo Peep, Slinky Dog, Hamm, Rex, and more. While they grew up with Andy, I grew up alongside them, and when they were no longer Andy’s toys I cried. But in Toy Story 3 the gang was passed onto Bonnie, and it seemed like a fitting end to the Toy Story movies. Woody still had a kid to make happy, and all was right. Then came along Toy Story 4.

When I heard Disney/Pixar was coming out with a Toy Story 4 I didn’t know what to think. I was happy with the way things ended in Toy Story 3, and really didn’t feel like there needed to be another one. (I also didn’t need another Toy Story movie that left me a blubbering crying mess. Haha!) On the flip side I was happy another Toy Story was coming out. I have grown up, and now have kids of my own and I was excited to share with them my love of Toy Story.

Before I go any further, I am going to give you a chance to read a short non-spoiler review I wrote for Geek for E. You can view it HERE. If you are ok with slight spoilers keep reading.

Toy Story 4 is fantastic, but it doesn’t feel like the first 3 Toy Story movies. To me it is a much more adult version of Toy Story, and was made for those of us who have grown up while watching the movies. We get to see Woody (Tom Hanks), Buzz (Tim Allen), Jessie (Joan Cusack), Bo Peep (Annie Potts), Slinky Dog (Blake Clark), Hamm (John Ratzenberger), Rex (Wallace Shawn), and the whole gang again, but the focus is much more on Woody and his journey.

A toy’s job is to be there for their kid. Woody was always Andy’s toy, and at the end of Toy Story 3 we were left thinking he was now Bonnie’s. Toy Story 4 makes us question that thinking. Toy Story 4 also makes us really question what a toy is, and when a toy is really considered a lost toy. (One of Woody’s greatest fears.)

The movie sets up these questions right out of the gate. Starting with a flash back to before Toy Story 3 to give a little back story as to what happened to Bo Peep. (Emotional) It then fast forwards to right after Toy Story 3. Per the previews we see Bonnie make a friend in school. His name is Forky (Tony Hale). Forky doesn’t know what he is, and Woody feels it’s his job to make sure Forky learns he is Bonnie’s toy. As the toys go on a road trip with Bonnie and her family Forky runs away, and Woody feels like it’s his job to bring him back.

While Woody is trying to bring Forky back to Bonnie they stumble into a carnival, and an old antique shop. There we are introduced to Gabby Gabby (Christina Hendricks) and her creepy henchman Benson. But we are also introduced to a bunch of amazingly funny characters who help Woody on his mission. Duke Caboom (Keanu Reeves), Ducky (Keegan-Michael Key), Bunny (Jordan Peele), and Giggle McDimples (Ally Maki) are all simply hilarious. Most of all though Bo Peep is back, and Woody learns she is a lost toy. (Or is she?) Together with Bo Peep, and his new friends, Woody goes on a mission to save Forky from Gabby Gabby.

Other than loving the movie it’s self I really loved what they did with the character of Bo Peep. Even though she is porcelain she is not afraid to rumble. She is a toy who has been around the block, or two, and knows what she wants out of life. The writers also took this movie to dig deeper into her relationship with Woody. (In actuality you could also look at Toy Story 4 as a love story between Bo Peep and Woody.) Behind Bo Peep is Duke Caboom, and Giggles McDimples.

Things I Was Disappointed With

There were really only two things I was disappointed with in this movie. The first was Buzz Lightyear. We love Buzz Lightyear in our family. But in Toy Story 4, while he was pretty funny, he was more of a back-burner character. They also made him come across as slightly unintelligent. While it was funny it wasn’t the Buzz Lightyear I remember and love.

The second was the creepiness of the “bad guy” characters of Gabby Gabby and Benson. (I say “bad guy” because Gabby Gabby serves two purposes in the movie. The antagonist, and a toy in need.) Personally, I feel these characters, and their intentions, are a little too adult for a G rated movie. The Benson doll is creepy, and Gabby Gabby has no qualms taking what she wants. (Even if it is without consent. Which as an individual and mother I have issues with.) Which leads me to whether I think it is safe for kids to see.

Safe for Kids to Watch?

Yes and no. Of course, I leave this decision to the parent’s, but my 3-year-old may not be able to see this movie. Which is unfortunate since she has seen the previous 3. Why? Because of Gabby Gabby, Benson, and unfortunately Ducky and Bunny. (Remember above where I said it had a more adult feel to it?) While you can kind of feel when there might be a tense spot developing in the movie creepy/scary dolls are not my daughter’s thing. Also, the minor violence towards Woody may scare a child who loves the Woody character. So, if your child is like mine you might want to pre-screen the movie. Or skip it all together for them.

How Would I Rate Toy Story 4?

Again, I thought the movie was fantastic. The animation is amazing and you may forget it was all created on the computer while you are watching it. The story is heartfelt, hilarious, and there are so many things an individual could relate with in the story. I can see why it had such a high rating before it even came out in theaters. I give it an A or 5 out of 5 stars.

Seen the Movie? Let Me Know What You Think!

If you go see Toy Story 4, I would love to read what you think. Leave your thoughts below in the comments. If you are looking to make your movie going experience that much cooler make sure you check out my post on how you can make your own Forky to take to the theaters with you. HERE.