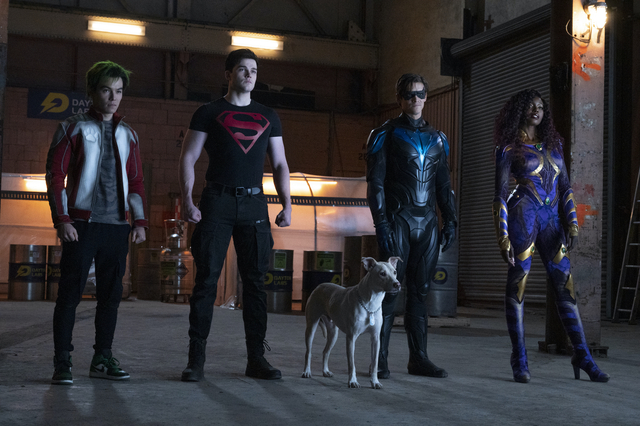 Watch out Gotham the Titans are coming

I am a huge DC Comics fan and I may have freaked out a little when I was granted access to screen the first 6 episodes of DC Titans Season 3. DC movies and shows can sometimes be hit or miss. But over the last couple of years, the DC TV shows that have been released have been really good. (Better than a lot of the DC movies.) DC Titans is one of those TV shows. (Doom Patrol is another one.) DC Titans is just on another level, and it is almost time for Season 3 to release on HBO Max. Starting August 12th you will be able to watch the first three Season 3 episodes, and then they will release a new episode every week on Thursday through October 21. To get you excited for the new season you can read my DC Titans Season 3 review below!

As I mentioned above I love DC Comics, and their TV shows are a perfect example of why. I started watching DC Titans in 2020 when everything shut down. I really should have been watching the show sooner. It took me only a couple of days to get through Season 1 and 2 because the show is that good. After Season 2 I thought to myself there is no way they would be able to top it. But in comes Season 3, and oh my goodness. DC Titans just keeps getting better every season. I am going to try really hard to not spoil anything about Season 3. Which is hard because everything is a spoiler. Haha!

Now some of the things I love about DC Titans are also in a way its downfall because it makes the show slightly predictable. Each season, while excellent, uses the same basic story formula. Of course, you have to have a bad guy or two, a Titan falls, a new Titan rises, and drama. (A lot of drama. I mean how many Titans has Dick Grayson had a relationship with here… Haha!) Season 3 is no different. Usually, we see the death of an important character during a season, but one of the reasons I love DC Comics so much is because no character is ever truly dead. But how that character’s death hits you is the key, and in Season 3 it’s not as heartbreaking as in past seasons. But my oh my does it still punch you in the gut when it happens.

In Season 2 Jason Todd’s character went through a huge arc, and in Season 3 it continues and it is amazing. The performance Curran Walters gives in Season 3, I feel, is award-worthy. You want to love Jason Todd’s character, but at the same time you hate him and it is just so good! As for Vincent Kartheiser, he is a force as the Scarecrow. The Scarecrow himself is such a scary and great character and Vincent does such an amazing job bringing this character to life.

You cant have the Titans without action

The last big thing I love about DC Titans is the action. The fight scene choreography in DC Titans is better than a lot of the DC movies out there, and the three who have some of the best fight sequences in Season 3 are Brenton Thwaites (Dick Greyson), Curran Walters (Jason Todd), and Savannah Welch (Barabara Gordon). I applaud all of the fight choreographers, stunt doubles, actors, and anyone who works on the fight sequences.

I love how this show just keeps getting better every season. While the show is not perfect if you are a DC Comics fan DC Titans is definitely a show you are going to want to watch. I give DC Titans Season 3 an A- rating so far. I cannot wait to see the rest of the season and discuss it with you!

DC Titans is a very bloody and gory show and earns its TV-MA rating. There is a lot of death, adult language, sex, violence, and psychological issues. So I do not recommend this show for anyone under the age of 16 years old. (Not for kids.)

TITANS follows young heroes from across the DC Universe as they come of age and find where they belong. In season three, circumstances draw our heroes to Gotham City, where they will reunite with old friends and face new threats.

Looking for more DC to watch on HBO Max? Make sure you check out my review of Zack Snyder’s Justice League Review HERE.