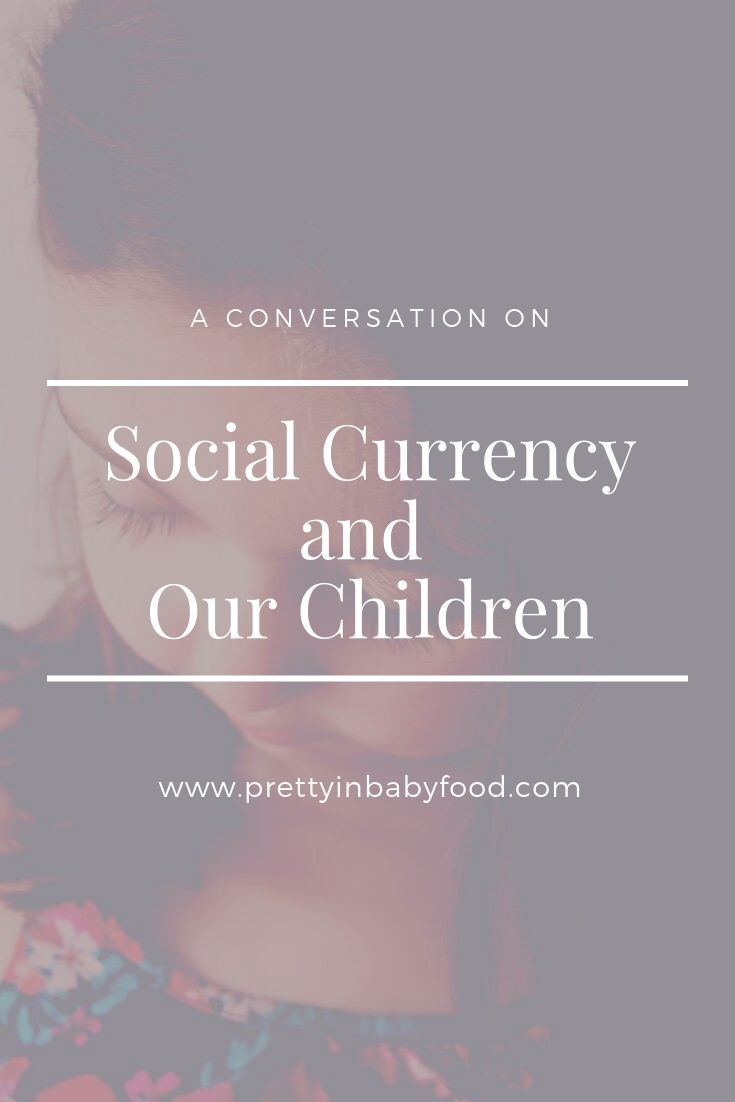 A Conversation on Social Currency and Our Children

I have been trying to write this post for months. So far it has been the hardest post for me to write. Haha! Why? Because I think it is an important topic and one, I believe deserves a conversation. Social currency is a growing trend. It has been around for a while, but today it is mostly pushed by the rise of social media and Influencer Marketing, and it is something our children are dealing with or will deal with in the future.

What is Social Currency?

What Does Social Currency Have to Do with Our Children?

In a world where influencer marketing is a multi-billion dollar a year industry, many parents believe kids should be taking advantage of it. (And I don’t mean waiting until your child is 18 years old.) Many parents are making the decision to start when their children are very young. Some lockdown domain names and social media accounts for their kids before they are even born. Why? Because in the future it may be possible for their child to be able to monetize their social media presence.

Did you know there are kids who aren’t even 15 years old yet who have more social media followers than most, and they are also already making more money a month than the average working adult? I’m not kidding. Haha! Kids even younger are monetizing their online presence. I am not saying this is a bad thing. In a way it is smart, but it comes with its own drawbacks.

Not only that but the internet can be dangerous. I have seen it many times. Parents post pictures of their kids on social media and then learn some creeps that have taken their photos and posted them to inappropriate social media pages or websites. Other things parents or children can experience on social media are inappropriate direct messages and comments. Stalking has also been known to happen.

Mental Health and Our Children

To put the icing on the cake social media has also been known to possibly cause stress, anxiety, and depression in people. (Possibly one of the many reasons Instagram is looking into getting rid of the visible post like counts.) So, imagine our children who are in the process of developing mentally and physically, and who do not 100% understand adult concepts being thrust into this kind of world. (I don’t know about you, but being a teenager before social media was hard enough. Haha!) Eventually, it will start to take a toll on them mentally.

Seeing Both Sides of The Coin

As a blogger and a mother, I personally see both sides of the social currency coin. Being a blogger, I use my social currency to be able to make money for my family and provide my children with experiences and things we normally would not be able to do or afford. Sometimes this means I need to post pictures of my kids to my social media accounts.

As a mother first though I want to protect my children and help teach them that there is life outside of social media and that their social currency doesn’t define them as an individual. My husband and I have many conversations about what photos and information is ok to post to social media. I ask my children if I can take pictures of them for campaigns, and if they do not want their picture taken, I don’t take it. Do our children have social media accounts? No. Will they? Eventually when we feel they are mature enough to have one sure. Do I feel my children may be at a disadvantage both financially and socially with not have social media accounts until they are older? Again, I have mixed thoughts on this. My business blogger side says yes, but my Mom side says who cares let them be children. Haha!

Questions I Have for Parents

Interested to see how Disney’s movie “Ralph Breaks the Internet” can help you teach your kids about the internet? Click HERE to read my thoughts!

Social Currency and Our Children
FacebookTweetPin