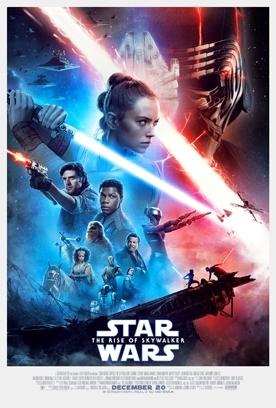 The Hardest Review I have Had to Write This Year

I got back from seeing an advanced screening of Star Wars: The Rise of Skywalker last night (12/17). The review embargo for this movie was this morning (12/18) at 3:01 am, but I needed some time to think and collect my thoughts. So, I slept on it and made myself a cup of coffee before sitting down to write this review. I am going to admit this is probably the hardest review I have had to write this year. Not only because I have to make sure there are no spoilers, but because I have such strong feelings in regards to The Rise of Skywalker. I will be having another post with spoilers later on after people have a chance to see it, but for now here is my spoiler-free take on Star Wars: The Rise of Skywalker.

Review for Geek for E

If you are looking for a short absolutely non-spoiler review of Star Wars: The Rise of Skywalker you can check out my short spoiler-free review for Geek for E HERE.

The Rise of Skywalker Movie Synopsys

The battle between the Resistance and the First Order rages on while Rey continues her journey to becoming a Jedi. Star Wars: The Rise of Skywalker opens in U.S. theaters on December 20.

Oh, man. There are so many thoughts and feelings running through my head when it comes to The Rise of Skywalker. I loved the original Episodes IV, V, and VI. I am not a huge fan of Episodes I, II, and III. (The story is good, but the execution of the movie and the acting is terrible.) Episode VII was much better than I, II, and III, but it seemed like Disney just made an updated version of Episode IV. Episode VIII seemed like they were going to take the last trilogy in a different direction, but it still was not better than Episode VII.

Then Episode IX was announced with J.J. Abrams back as the director, and my first thought was Disney felt like they had made a mistake when making Episode VIII, and they were bringing back J.J. Abrams to right their wrong. I feel having two different directors for VII and VIII did make the story jumbled, and almost like Disney did not know where they wanted to take the Saga or how they wanted it to end so they thought bringing back J.J. Abrams and the nostalgia would fix it.

What was the end result? A movie that will divide fans. J.J. Abrams, in my opinion though, did the best with what he had. As always the visuals of the movie are stunning, the music is amazing, and fans get the nostalgia of seeing original characters. (One of the main things they loved about Episode VII.) Loose ends are pretty much all tied up, but there are things missing, and during parts of the movie it didn’t even feel like it was a Star Wars movie.

The whole movie is pretty fastpaced, which at first, covers up some plot holes in the movie. The acting is definitely better than in Episodes I, II, and III, but Disney tried to recreate the chemistry that existed between Leia (Carrie Fisher), Luke (Mark Hamil), and Han (Harrison Ford) with its characters of Rey (Daisey Ridley), Finn (John Boyega), and Poe (Oscar Issac), and it just didn’t happen.

Now, don’t get me wrong. There were good aspects of the movie. I thought J.J. Abrams did a great job with the resolution of Leia’s character given that Carrie Fisher passed away in 2016, and he had to use previously shot footage of her. I think the droids, C-3PO, BB-8, DO, and a new character, Babu Frik, are pretty funny and have some of the best lines of the movie. Again, the visuals were stunning, but it all wasn’t enough to push The Rise of Skywalker into epic movie territory.

I agree with the PG-13 rating of this movie. (I feel Disney really stretched that rating though.) There is a lot of violence, some blood, adult language, and of course some scary Sith individuals. But, if your children have seen any of the other Star Wars movies then they will probably be able to handle The Rise of Skywalker.

So, after having said everything above what would I rate Star Wars: The Rise of Skywalker? I give it a solid B. (I really wish I could give it an A.) It’s an entertaining movie that some will dislike, but others will love it.

Are you excited to see Star Wars: The Rise of Skywalker? Do you have your tickets already?!