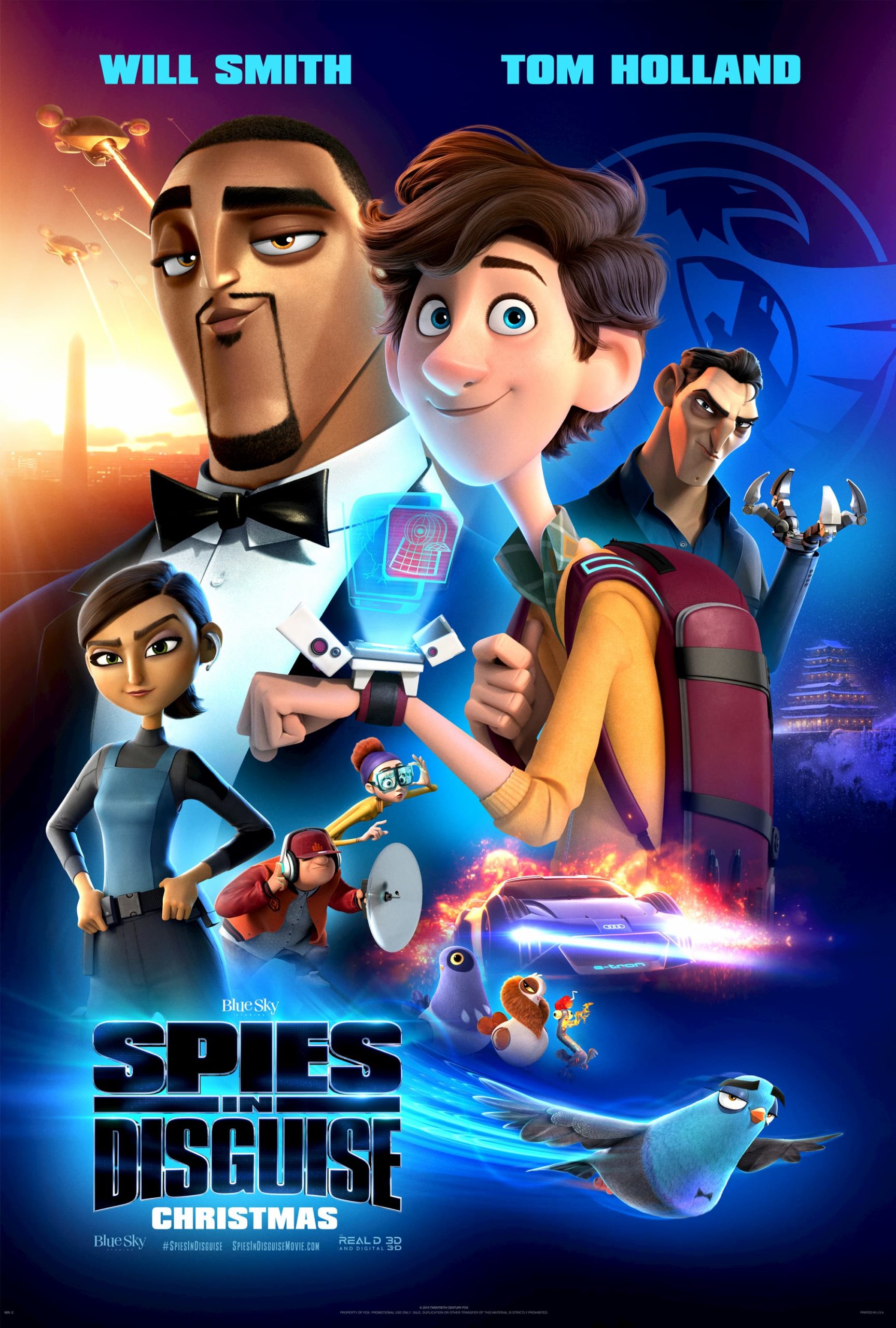 One of the First to See Spies in Disguise

During The Geekly Retreat in November, we did so many amazing things and got to watch a lot of movies. One of those movies was Spies in Disguise. Why is that so cool? Because I was one of the first people to actually see the movie right after it was finished. I got to sit down with the Directors of the movie Nick Bruno and Troy Quane and hear directly from them their thought and decision making processes about the film. It was amazing, and a dream come true. But what did I think of the movie? Read below to find out!

“Super spy Lance Sterling (Will Smith) and scientist Walter Beckett (Tom Holland) are almost exact opposites. Lance is smooth, suave and debonair. Walter is … not. But when events take an unexpected turn, this unlikely duo are forced to team up for the ultimate mission that will require an almost impossible disguise – transforming Lance into the brave, fierce, majestic… pigeon. Walter and Lance suddenly have to work as a team, or the whole world is in peril.”

Even though how/where I saw Spies in Disguise was amazing that in itself doesn’t make it a great movie. There are some aspects of the movie I loved, and some let downs. Let’s start with what I loved.

I loved the Walter Beckett (Tom Holland) character. As a LEOW (Law enforcement officer wife) Walter’s character hit me in the feels. Why? Because he wants to create gadgets that will help his mom, a police officer, and also protect other people. Even the bad guys. Violence is not always the answer and Walter helps to show that. (As a side note the beginning of Walters story, as a LEOW, made me cry.)

The main let down for me, in my opinion, is that some important character development is missing causing the movie to be just a good movie, not a great movie. (To be honest with you I feel it would have been a super cool live-action movie, but I don’t know how that could be pulled off. Haha!) Even though the other main character Lance Sterling (Will Smith) is hilarious the connection between his character, Walter, and the audience isn’t 100% there.

Really good writing and character development pulls an audience in so they feel what the characters are feeling and invests them in that character. There was a little bit of this at the beginning of the movie for Walter, but none of it really for the character of Lance. Which I would have liked to have seen. I would have loved to have seen why he was a loner. Other characters such as Eyes (Karen Gillian) are heavily advertised for the movie and they barely do anything in it.

So, what’s my rating? I really wanted to love Spies in Disguise so much because of the opportunity I had to see it first, but while the movie does have an all-star cast, epic animation, and is entertaining I only give it a B-.

Is It Safe for Kids?

Yes and no. Due to the amount of violence in the movie, even though it’s animated and PG, as a parent, I do not recommend it for kids younger than 7-years-old. (I was actually surprised at how much violence was in the movie, and it almost seems like an animated movie made for adults.) Death is discussed, there is a lot of peril, there is a semi-scary villain, and there is some animated nudity. (Butts)

Spies in Disguise comes out in theaters on December 25th. If you have seen it or are planning to go see it I would love to hear what you think of the movie!

In conjunction with the movie, they are releasing a mobile run game based on Spies in Disguise called Spies in Disguise: Agents on the Run. I was also one of the first individuals to get a sneak peek of the game. You can click HERE to read all about the game!

What is everybody up to this blursday? 🤣 Right

How many times has your family watched @disneyfro

@sonicmovie will be available for digital purchase

Bring on all of the digital movie releases! My fam

(AD) My kids enjoy watching SpongeBob, but I did n

@sonicmovie is coming out for purchase on digital

How is everyone doing? I will be honest with you.

Here's the first 8 minutes of #SonicMovie for FREEEE!
https://wegotthiscovered.com/movies/watch-8-minutes-sonic-hedgehog-movie/?jwsource=cl

I am really looking forward to #snowpiercer