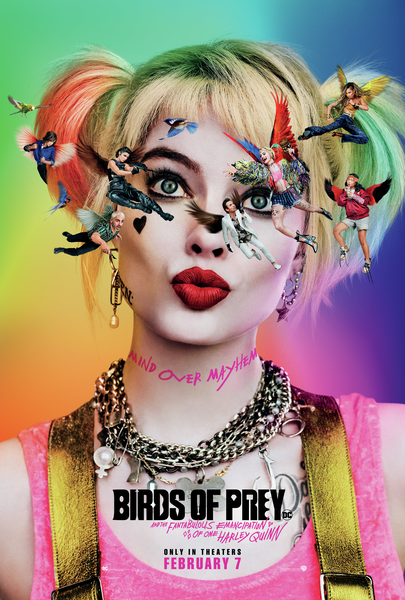 Where are all my DC Comic fans at?! Birds of Prey is coming, and I cannot contain my excitement! I have been a DC Comics fan ever since Batman: The Animated Series premiered in 1992. (I think I just aged myself. Haha!) I love all of the DC Comics characters, and their stories, but one character pretty much tops all of the others, and that is Harley Quinn. I was devastated when Suicide Squad premiered and was, let us just say, not good. But I was struck by Margot Robbie’s portrayal of her and now I cannot wait for February 7th when we get to see her again in Birds of Prey – And the Fantabulous Emancipation of One Harley Quinn.

Who is Harley Quinn?

Harley Quinn actually started out at as Dr. Harleen Quinzel, Ph.D. She was a Psychiatrist who worked at Arkham Asylum who falls in love with the Joker. (You know, the regular old girl meets boy kind of story. haha!) She becomes the Joker’s accomplice and girlfriend, but they have an on/off volatile relationship. Harley loves the Joker, but he spends a lot of his time putting her down and then trying to convince her he really does care about her. But, Harley Quinn’s character is more than just the Joker’s sidekick/girlfriend and in Birds of Prey, it looks like we get to see Harley Quinn break free of the Joker and go her own way.

But Wait Hold Up. Who Are the Birds of Prey?

I am so glad you asked! Haha! In short, The Birds of Prey were originally a superheroine group consisting of Black Canary and Barbara Gordon. Later on, Huntress and Lady Blackhawk were added. Other characters such as Poison Ivy, Cassandra Cain, etc were added much later. But let us focus on the characters who will be in the new movie Birds of Prey. Angie and I will be highlighting individual characters. You can click on the character name to learn more about that character. Huntress, Black Canary, and Renee Montoya. PLUS! Check out Monica Delmonico’s post on how to create your own Harley Quinn Birds of Prey caution tape jacket HERE.

“You ever hear the one about the cop, the songbird, the psycho and the mafia princess? “Birds of Prey (And the Fantabulous Emancipation of One Harley Quinn)” is a twisted tale told by Harley herself, as only Harley can tell it. When Gotham’s most nefariously narcissistic villain, Roman Sionis, and his zealous right-hand, Zsasz, put a target on a young girl named Cass, the city is turned upside down looking for her. Harley, Huntress, Black Canary and Renee Montoya’s paths collide, and the unlikely foursome have no choice but to team up to take Roman down.”

I am so freakin excited for this movie to come out, and to explore Harley Quinn without Joker. There are also so many great actors/actresses in the movie. (Margot Robbie as Harley Quinn, Mary Elizabeth Winstead as Huntress, Jurnee Smollett-Bell as Black Canary, Rosie Perez as Renee Montoya, Chris Messina as Victor Zsasz, Ewan McGregor as Roman Sionis, and Ella Jay Basco as Cassandra “Cass” Cain.) Every single woman in Birds of Prey looks badass and ready to bring it.

Birds of Prey – And the Fantabulous Emancipation of One Harley Quinn is Rated R and coming to theaters February 7, 2020

Are you excited to see Birds of Prey? Will you be taking your girlfriends to see it? Have you seen Joker? If not click HERE for my review!