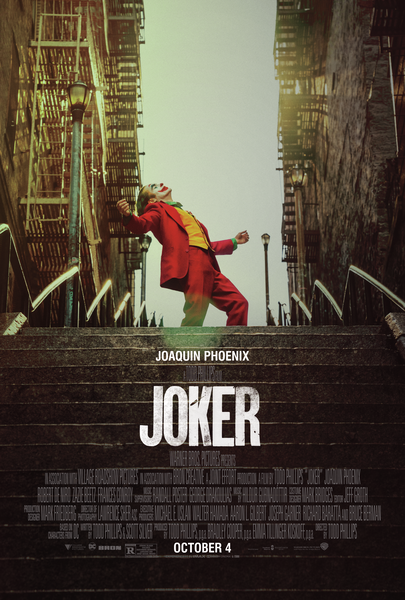 I love comic books. I have for as long as I can remember. They are the best form of escapism reading. The characters created remind us of ourselves, but with superpowers. Haha! (Or money and gadgets.) From the stories to the drawings, and everything in between comic’s are art. If they are translated correctly to the movie screen a studio can have a hit on their hands, or not done correctly a flop. While some might disagree, Disney has done a great job bringing the Marvel Universe to life on the big screen. Warner Bros. and DC Comics, on the other hand, have had a rough go of it with more misses than hits. But as a DC Comics fan I am so happy to say Joker goes onto the list of hit movies for Warner Bros. and DC Comics. Read below to see why.

While I try my best not to include spoilers in my reviews sometimes light ones do happen. If you are looking for an absolutely non-spoiler review of Joker you can check out my short spoiler-free review for Geek for E HERE. Also, I do not have a “Safe for Kids” section for this movie. THIS MOVIE IS NOT FOR KIDS. Keep the kids at home for this one.

Arthur Fleck ( Joaquin Phoenix) is an unhappy man. He is on multiple medications to help with his mental illness and uncontrollable fits of laughter. He lives with and takes care of his mom, Penny Fleck (Frances Conroy), while working as a clown for hire in Gotham City. On top of taking his medication, he also sees a therapist but feels she never actually listens to what he says. No one does, and he feels like no one cares.

Then things start going downhill. Arthur loses his job, and access to his therapist and his medication, but holds onto his dreams of being a standup comedian. One fateful night on the metro finds Arthur fighting back against those who mistreat him, and the end result creates a spark that lights a fire in him, and in Gotham City. Directed by Todd Philips Joker also stars Robert De Niro (Murray Franklin), Zazie Beetz (Sophie Dumond), and Brett Cullen (Thomas Wayne).

I loved this movie. While there have been many actors who have played the role of Joker and some, like Heath Ledger, have given amazing performances I felt they always lacked something. They never really showed how disturbed the Joker really was. Joaquin Phoenix as the Joker is amazing, and possibly gives the best performance of his career so far. He and Todd Philips bring the truest representation of what/who the Joker character is to the big screen. The character of the Joker has some tough shoes to fill and Joaquin Phoenix did what he had too to fill them.

His method acting for the film was spot on. He lost a significant amount of weight to play the part and he really got into the mind of the Joker. There has been a lot of talk about how this movie glorifies mental illness and that is so far from the truth. If anything, Joker allows those who do not suffer from mental illness to be able to see how mental illness affects others. It lets us see into the pain, thoughts, and hopelessness some people feel.

I have also read people are concerned about the level of violence in the film. While Joker is violent it is not as violent as other movies that have been released this year. John Wick has more death and violence than Joker. The movie Ready or Not has more blood and gore than Joker. It is the context of the violence, and in which it occurs, in Joker that may make it uncomfortable for some people. There are emotions behind the violence. The character of Arthur knows what he is doing. He knows right from wrong. First, he is defending himself then he starts lashing out in anger. In the end, he knows there is no going back, and fueled by the city in which he lives, he just keeps going.

I give Joker an A+. It will suck you in and leave you wondering how can Warner Bros. and DC Comics top it. It stays with you and makes you think. There were connections proposed in the movie between Joker and Batman that I found so interesting, but in a way get debunked in the movie. I’m not buying it though. Haha! Joker is out in theaters now. Buy a ticket, and go see how Batman’s greatest nemesis comes to be. Then come back here and let me know what you think!

#ArmyofThieves is a funny but safe money heist movie. Matthias Schweighöfer is exceptionally funny and 100% makes the movie. Worth a watch if you liked Army of the Dead. Army of Thieves releases on @netflix on 10/29. Read my full review here -> http://ow.ly/ni2V50GzpO5 #Netflix

Anyone in #media covering #OrlandoFilmFestival (@OrlandoFilmFest) and want to add a little something about my short film “Bloom” in their coverage?

#Dune Part Two will officially release in theaters in October 2023.