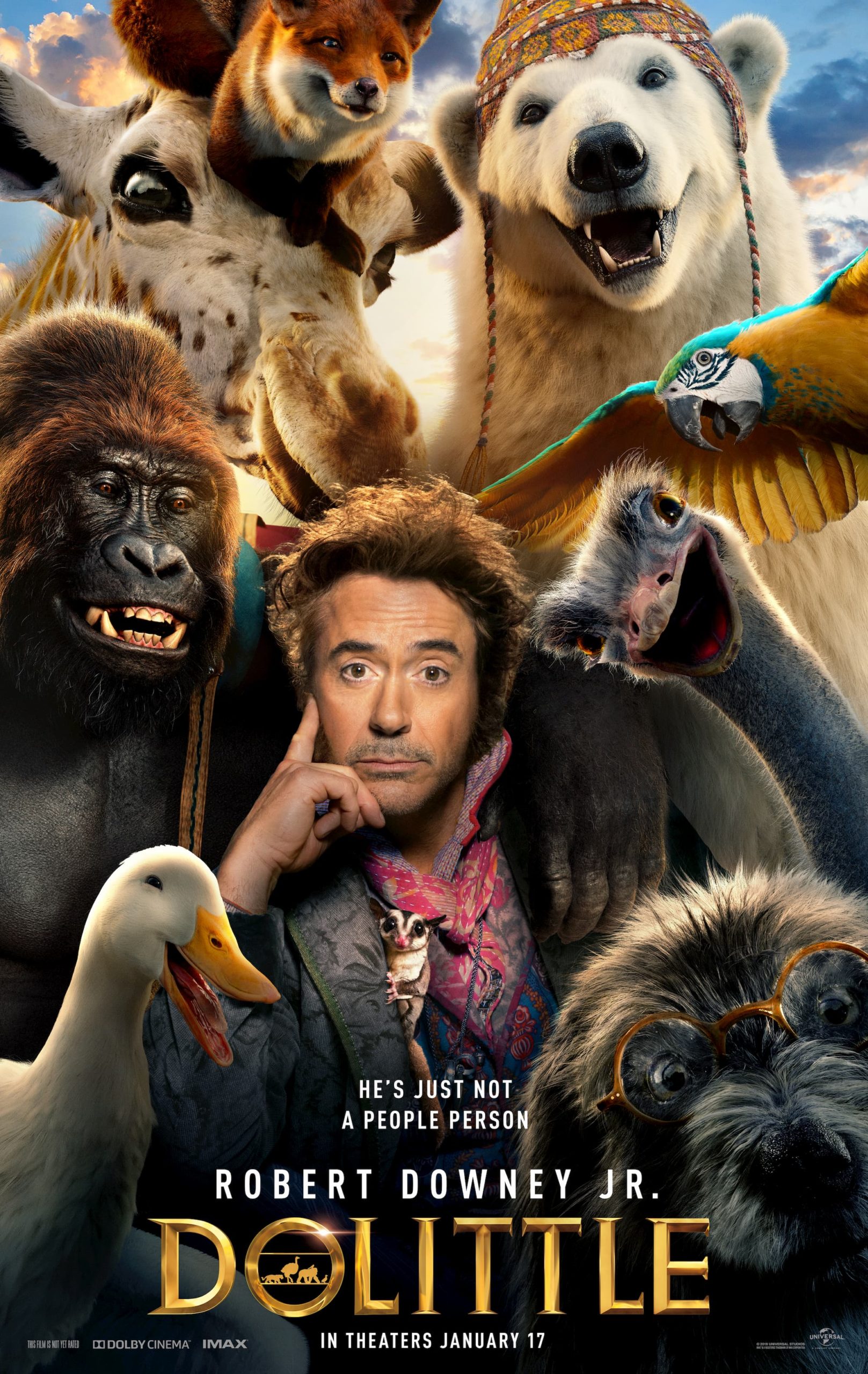 Since 1920 Dr. Dolittle has been captivating readers. Who remembers reading the Dr. Dolittle books when they were growing up? I do. I remember being fascinated by the fact he could talk to animals and wishing I had the ability to talk to my cat to see what he was thinking. Most though probably remember the role of Dr. Dolittle as being played by Eddie Murphy in 1998 and in the 2000’s. Now, Robert Downey Jr. is stepping into the role of Dr. Dolittle for Universal Pictures new movie Dolittle. How is the movie? Read my review below to find out!

Review for Geek for E

If you are looking for a short absolutely non-spoiler review of Dolittle you can check out my short spoiler-free review for Geek for E HERE.

After losing his wife seven years earlier, the eccentric Dr. John Dolittle (Downey), famed doctor and veterinarian of Queen Victoria’s England, hermits himself away behind the high walls of Dolittle Manor with only his menagerie of exotic animals for company. But when the young queen (Jessie Buckley, Wild Rose) falls gravely ill, a reluctant Dolittle is forced to set sail on an epic adventure to a mythical island in search of a cure, regaining his wit and courage as he crosses old adversaries and discovers wondrous creatures.

Truth time. Haha! When I first saw the trailer for Universal Pictures Dolittle I was not impressed, and I wasn’t going to see it. (Gasps!) But as luck would have it I was not able to go to a screening of a different movie earlier that week so I decided to see Dolittle, and I was pleasantly surprised. I actually really liked Dolittle! It has an all-star cast, and I don’t mean just a couple of amazing actors. There are a lot that voice the animals. I laughed out loud throughout the whole movie, but I was really left confused by the accent Robert Downey Jr. did in the movie.

I spent the whole movie asking myself what is going on with his voice, is it dubbed? Haha! (A lot of times when he talked the camera really didn’t focus on him, or he was talking off-camera.) Was he using a British accent, an Irish or Scottish accent? I have read it is a Welsh accent, but it still leaves me confused. His voice was all over the place to the point where it was almost distracting. (Worse than Daniel Craigs Knives Out accent.)

On the flip side, I loved the CGI animals, and there is a lot of star power voicing them. My favorites were Poly the Parrot (Emma Thompson), Chee-Chee the Gorilla (Rami Malek), Yoshi the Polar Bear (John Cena), Plimpton the Ostrich (Kumail Nanjiani), Barry the Tiger (Ralph Fiennes), and Kevin the Squirrel (Craig Robinson). Even with Robert Downey Jr. as the main character, it was all of these animal characters/actors who had the best and funniest lines of the movie. To me, it was almost as if the animals were the main characters, not Robert Downey Jr. (Other amazing actors you will see or voiced animals in the movie are, Antonio Banderas as King Rassouli, Michael Sheen as Dr. Blair Müdfly, Jim Broadbent as Lord Thomas Badgley, Tom Holland as Jip, Selena Gomez as Betsy, and Marion Cotillard as Tutu.)

BUT, the biggest thing I loved about the movie was that it showed, through the stories of its characters, that you can overcome anything. If you have a hard time making friends, don’t have self-confidence, are anxious or scared, feel trapped in your life or are dealing with grief, you can overcome it. Sometimes it takes time and good friends, but there is light at the end of the tunnel. This is an important message for kids and adults alike, and I feel Dolittle teaches this lesson very well.

I give Dolittle a B+. It is a movie the whole family can watch, and I cannot wait for it to come out on digital so I can sit down and watch it with my kids. Dolittle is rated PG and is in theaters on 1/17/2020.

Will you be going to see Dolittle in theaters? Once you do let me know what you think of it! Tell me in the comments.

If you are looking for another movie the whole family can enjoy make sure you check out my review of Abominable HERE. It is out on Digital and Bluray now!