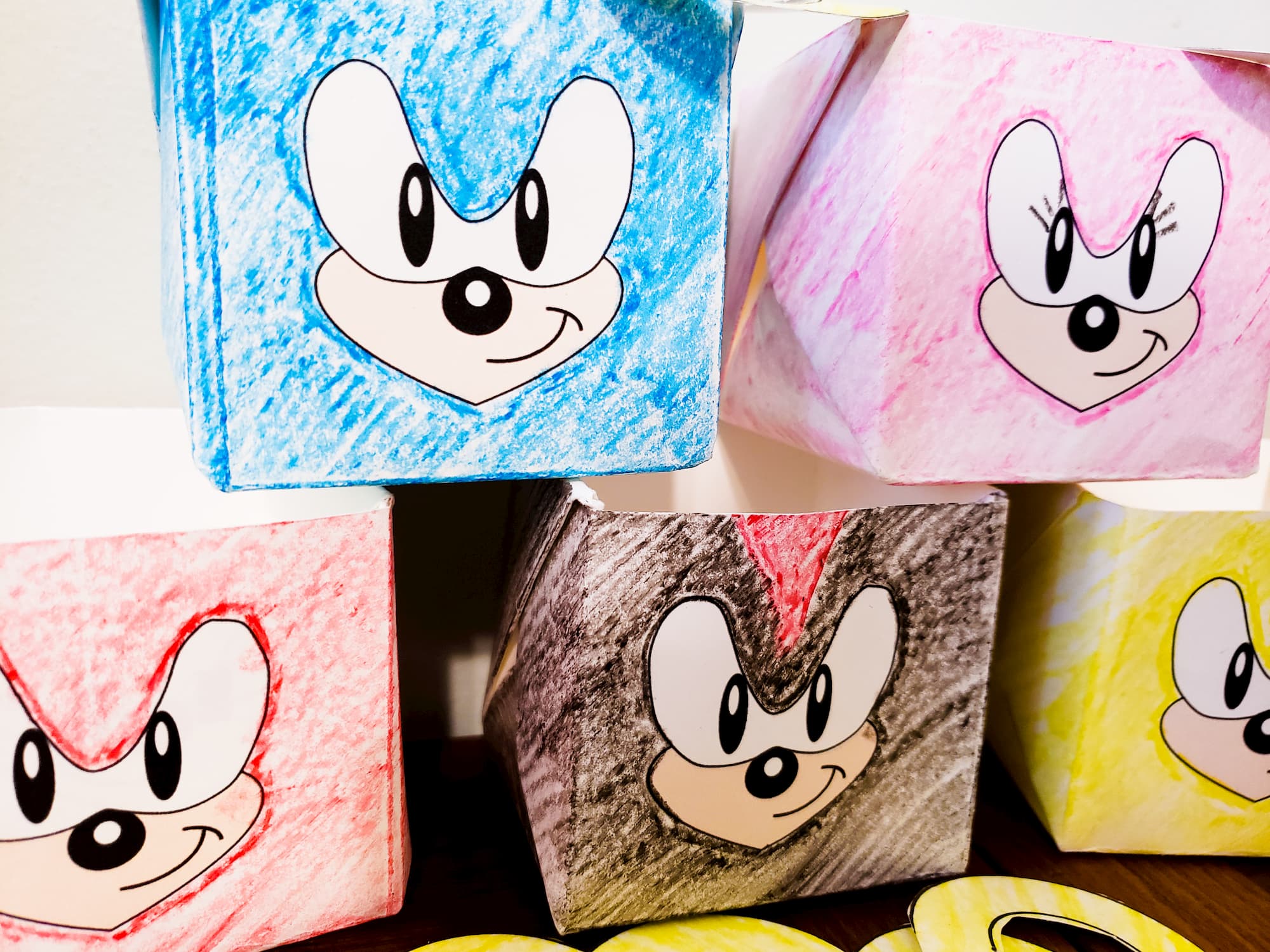 I have fond memories of playing Sonic the Hedgehog on my Sega when I was a kid. I also sat and watched my sisters play. It was so much fun, and some times frustrating when I couldn’t beat a level. I kept at it though. (Haha! Unlike Eco the Dolphin or Marbles. I gave up on those games.) Now, my Sega system might be gone, but Sonic the Hedgehog is coming back! That’s right, and I am so excited for him to be introduced to a new generation and my kids. So, in honor of Paramount Pictures new Sonic the Hedgehog movie I created a Sonic DIY Ring Toss craft/game that you will be able to make and play with your kids.

I wanted this craft/game to be fun and enjoyable for all ages. So, all you will need is my Sonic Ring Toss Craft – Box template and my Sonic Ring Toss Craft – Rings template printed out on cardstock, crayons or markers, and scissors. The main part of this craft is creating the box so I hope your paper folding game is on point. Haha! I also created this craft in a way where you can make different Sonic the Hedgehog characters. All you need to do is print out multiple box templates and color each of them a different color. Red for Knuckles, Black for Shadow, Pink for Amy, Yellow for Super Sonic, and Blue for Sonic! (For Shadow and Amy I personalized them ever so slightly. I used some red on Shadow, and I gave Amy some eyelashes.)

How to Create the Game

First, you will need to print out the templates. You can use regular printer paper, but cardstock is best. You have the choice of printing on colored cardstock or letting the little ones color the pages. I suggest printing out and coloring the rings first and then cut them out. Poof! The rings are done. Haha! Now, it’s on to the more challenging part, creating the box. You can color the box paper either before you start folding or after. Totally up to you. Since the box requires folding and has many steps I created a video below.

How to Play the Game

Once all of the boxes you want to make are made, and the rings are colored and cut out, it is time to play! The goal of the game is to toss the rings into the box of your chosen character. You can line the boxes up and each take a turn or have a head to head match. My daughter loves to play head to head. To do this place your chosen character box in front of the other player, and vice versa, then take turns tossing your rings to try and get them into your character box. The winner is the individual who tossed the most rings into their box.

What the Game Helps to Teach

Crafts and games that help teach and practice skills are so important. This craft/game is great for helping to work on colors, coloring, practicing cutting with scissors, counting, following directions, and also hand-eye coordination. Plus it is a lot of fun!

If you end up making and playing my Sonic the Hedgehog DIY Ring Toss Craft/Game let me know in the comments how it went!

About the New Sonic the Hedgehog Movie

Based on the global blockbuster videogame franchise from Sega, SONIC THE HEDGEHOG tells the story of the world’s speediest hedgehog as he embraces his new home on Earth. In this live-action adventure comedy, Sonic and his new best friend Tom (James Marsden) team up to defend the planet from the evil genius Dr. Robotnik (Jim Carrey) and his plans for world domination. The family-friendly film also stars Tika Sumpter and Ben Schwartz as the voice of Sonic.