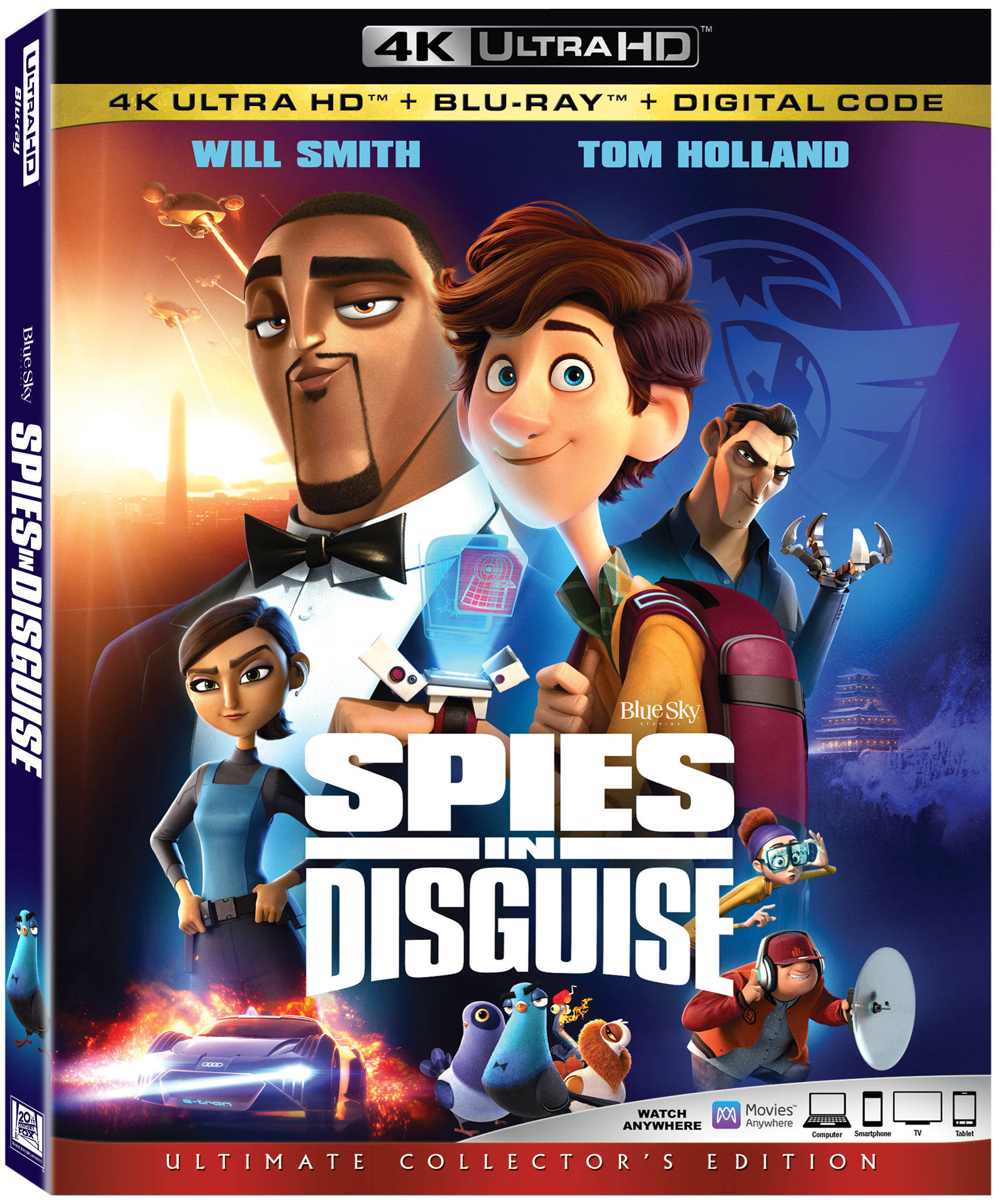 It’s great to be a spy

It is so exciting to say that Spies in Disguise is coming out on home release! On March 10, 2020, you can bring home the adventure on Digital, Blu-ray™, and 4K Ultra HD™. It seems like it was just yesterday I was on The Geekly Retreat in California getting to do so many amazing things and getting to watch a lot of movies. One of those movies was Spies in Disguise. (You can read my spoiler-free movie review HERE.)

Why is that so cool? Because I was one of the first people to actually see the movie right after it was finished. I got to sit down with the Directors of the movie Nick Bruno and Troy Quane and hear directly from them their thought and decision making processes about the film. I also had a chance to be one of the first to try out Spies in Disguise companion mobile game. Spies in Disguise: Agents on the Run. (You can click HERE for my review of the game.)

To help celebrate the in-home release of Spies in Disguise make sure to join me and other Geekly retreat alumni on March 10th at 9 pm as we hold a twitter party to talk all things Spies in Disguise. Just follow #MyMovieChat

In this high-flying animated comedy, super-spy Lance Sterling (Will Smith) and scientist Walter Beckett (Tom Holland) are almost exact opposites. Lance is smooth, suave and debonair. Walter is none of the above. But this unlikely duo must team up for the ultimate mission to save the world when a “biodynamic concealment” experiment transforms Lance into a brave, fierce, majestic…pigeon!

Experience the hilarious thrills of SPIES IN DISGUISE, which is Certified-Fresh on Rotten Tomatoes™, from the comfort of your own home, along with Blu-ray™️ bonus features including multiple making-of featurettes and two awesome music videos. Additionally, the Blu-ray™️ edition of SPIES IN DISGUISE includes “Super Secret Spy Mode,” an immersive, in-movie experience that takes you deeper into the story with Easter eggs, fun facts, and behind-the-scenes insights into the making of the film. Add SPIES IN DISGUISE to your digital collection on Movies Anywhere, or own it on 4K Ultra HD™️, Blu-ray™️ and DVD on March 10. Rated PG for action, violence, and rude humor.

Spies in Disguise on Digital and Blu-ray 3/10
FacebookTweetPin

(AD) Are You Afraid of the Dark? New DVD! Full di

(Ad/gifted) A super duper huge thank you to @theto

Any Star Trek fan's here?! I am a huge fan and I a

(AD) Since this week is Dino week for our at home

No thats not a picture of a space ship. 🤣 Thats

(Ad) So here is something I was not expecting! Rec

(Ad) Have you seen @scoob yet?! My girls and I lau

(AD) I don’t know about where you live, but it h

Red Shoes and the Seven Dwarfs premieres on digital and on-demand September 18, and on Blu-ray™, and DVD September 22. I just watched the trailer... and I have some thoughts about it. Haha! Click to read my trailer reaction. http://ow.ly/UYDO50ATSUD #lionsgate

The Swan Princess: A Royal Wedding is now available on digital and to rent at Redbox. Click to read my review and to download super cute activity sheets to go along with the new movie! http://ow.ly/olUH50ATzqc #Sonypictures #moviereview #theswanprincess

Any Star Trek fan's here?! I am a huge fan and I am so excited that @Nickelodeon @NickAnimation, and @CBSTVStudios have announced a new series for kids called @StarTrek Prodigy. Click below to learn more about the new kid's show! http://ow.ly/Lxr250ANp47 #nickelodeon #startrek

(AD) I think out of all the @Nickelodeon @pawpatrol DVD’s we have Paw Patrol: Dino Rescue is my favorite. I also may have a new favorite pup in Rex! Click to learn about the new DVD and how you can enter to win your own copy. http://ow.ly/bUJL50AMX7X #nickelodeon #pawpatrol