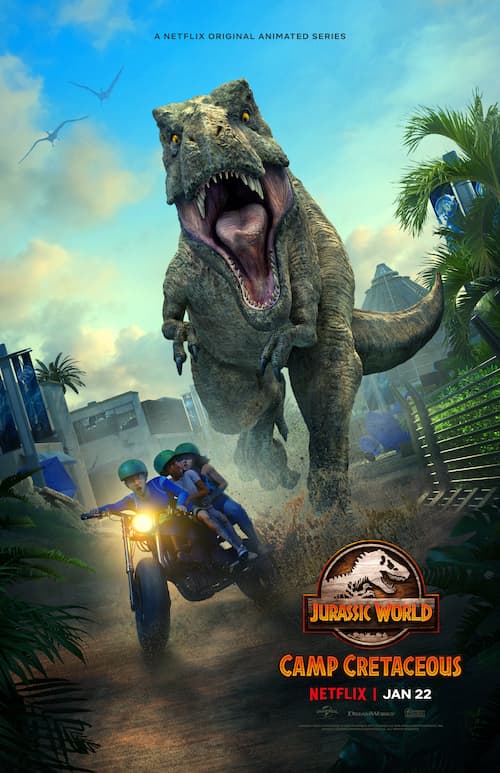 One of my favorite franchises

I have grown up on the Jurassic Park franchise, and am a lover of Jurassic World as well. I remember watching Jurassic Park for the first time and being so scared of the T. Rex. Haha! To this day every time I eat Jell-O I hold it on my spoon, look at it, and watch it jiggle. Haha! When I look at a puddle with ripples I think of the T. Rex. So, the fact I can introduce my kids to the franchise through the animated show Jurassic World: Camp Cretaceous on Netflix is amazing.

Like me, my kids love the suspense and watching the T. Rex roar. There is just nothing like it. I recently had the opportunity to screen the full season 2 of Jurassic World: Camp Cretaceous as well as interview it’s Executive Producer and Showrunner Scott Kreamer. (Dream come true.) Below is my review and interview! Jurassic World: Camp Cretaceous Season 2 is out now on Netflix!

Let’s recap. In the first season, we saw the kids survive the events of the first Jurassic World movie. The Dinosaurs and the Indominus have escaped their enclosers and are roaming freely around Isla Nublar. Everyone has been evacuated except for Camp Cretaceous campers Darius (Paul-Mike’l Williams), Kenji (Ryan Potter), Brooklyn (Jenna Ortega), Sammy (Raini Rodriguez), Yas (Kausar Mohammed), and Ben (Sean Giambrone). They struggle through the first season just trying to stay alive, running into all sorts of Dinosaurs like the Toro, Indominus, Mosasaurous, etc. at the end the campers have lost Ben and all hope of getting off of Isla Nublar.

Now we are onto season 2. I don’t think I have seen so much heart-pounding edge of your seat action in a kid’s show before. I love it. Haha! My kids love it. Netflix hit gold with Jurassic World: Camp Cretaceous and the fact it is back for a second season makes me happy. The show is so good and I do not want to spoil anything for you, but I was able to screen the whole second season and we are in for more Dinosaurs, action, and suspense.

We will continue to see Darius and all of the others grow closer together as friends, but also grow individually. They will be faced with situations that will test their friendship, their knowledge of Dinosaurs, and their trust of other people. Emotions run high in season 2 of Jurassic World: Camp Cretaceous. If you are a fan you will love every single moment of it, and some will leave you jumping with joy.

I recently had the honor and pleasure to sit down with Scott Kreamer the Executive Producer and Showrunner for Jurassic World: Camp Cretaceous to discuss the series and season 2. (Fangirl scream. Eekkk!) It was so fun to hear from Scott and learn the biggest challenge of the show was the “big expectations” along with how he hoped kids and families would take away from the show that “…we are stronger when we stick together.”

In my interview I was able to ask Scott about the campers, and why they chose those specific kids. (Track star, social media star, etc.) We discussed how Camp Cretaceous fits into the Jurassic World franchise, and also his favorite Dinosaur. My biggest takeaway though is that even though Jurassic World: Camp Cretaceous is a kid show it still has the feeling of the Jurassic Park/World movies. This was something Scott mentioned was very important. Scott said that they, “…didn’t want to shy away from the scariness. We wanted the stakes to be real without it being bloody.”. Well, Scott, you accomplished this in Jurassic World: Camp Cretaceous beautifully. You can check out my full interview with Scott below.

Now stranded on an abandoned Isla Nublar, the campers struggle to survive among the wreckage of Jurassic World. As the T.Rex takes over Main Street, forcing the kids deeper into the jungle, the discovery that they may not be alone not only threatens their rescue but may uncover something more sinister.

If you have younger kids and are looking for something with less action then make sure you check out my review and interview with the creators of Gabby’s Dollhouse on Netflix HERE.