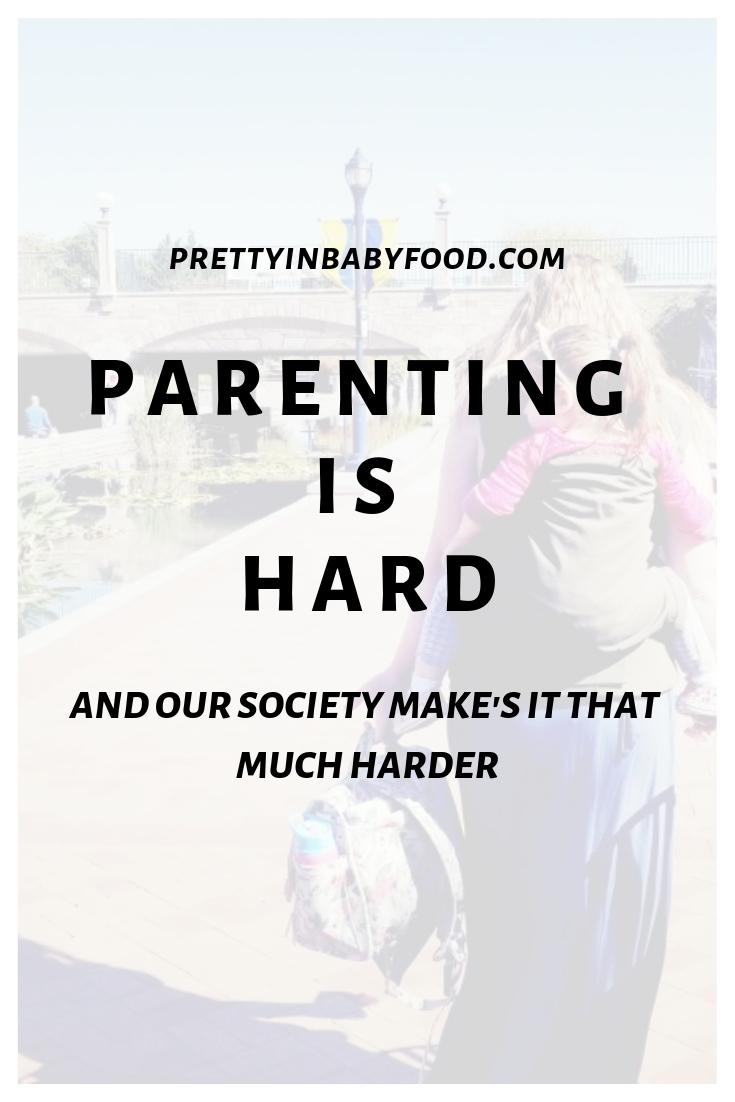 1 Comment on Parenting Is Hard, and Our Society Make’s It That Much HarderFamily, Mom Life prettyinbabyfoodAugust 1, 2017July 20, 2019babies, mom life, Parenting, society
FacebookTweetPin

I am now a parent to two kids, and everything I wrote below years ago still holds true. Parenting is tough when you seem to have an endless peanut gallery of folks putting you under a microscope, and automatically thinking you will fail. But I believe in you, and you got this!

I am coming up on my second year of being a parent, and I am starting to really notice somethings that are really starting to get on my nerves. No, it’s not the terrible two’s tantrums, or the being tired from being pregnant with our second while having to run after our toddler. Or even the fact that I swear there are other people living in my house that aren’t cleaning up after themselves. (There is no way three people can make our house so dirty. Haha!) It’s other things. Like society that are getting on my nerves.

Specifically, surrounding parents and their decisions. I will admit before I was a parent I did not notice a lot of what was going on in society. (It’s sad I know.) I was in my own single person world worried about paying my rent, going to school, and having fun. When I had my daughter it all changed. I was now concerned about our society because I was going to have to bring my daughter up in it, explain to her what was going on, and do this while also trying to navigate being a good parent. Being a parent is hard to begin with, but our society makes it that much harder to parent. How? Why? Because society also wants to parent our children for us.

Society and their “standards”

Society and their “standards” as to what a parent should and shouldn’t do makes parenting that much harder. You can be verbally attacked and threatened for making decisions for your children just because someone else disagrees with your decision. As long as your child is happy, healthy, learning, and growing who cares?! Parents are judged in today’s society for so many things. If you choose to work and send your kids to daycare you are judged.

If you choose to stay home with your kids you are judged. Society judge’s parents for their choices on how they dress their kids, if they give them high fructose corn syrup, feed them canned baby food, how and/if they vaccinate, what religion they raise their kids, if they use disposable diapers or cloth diapers, whether you breastfeed or not. They judge you on where you breastfeed and if you are showing too much boob for their liking, and the list goes on AND ON. Parents are now also being judged on how many children they have or want. (Sigh)

It is so easy now for people to sit behind their computers, hop on the internet, and judge other people. Well you know what? Words hurt people. Words can be more destructive than physical violence. You know those children who you are commenting about? Well they are watching, and they are going to grow up and your words can impact them because they will see them.

So as a parent, I say to you sanctimonious society who died and made you the boss? Who cares if a parent puts a safety harness backpack on their child. You don’t know them. Their child may be a runner. A mom wants to breastfeed her child in public. Who cares! Let her feed her child. You eat food in public, and a lot of you don’t look good doing it either. I don’t say anything though, because it’s your choice and right to do so. It is also the parents right and choice to decide to home school their children or send them to public or private school. Also, the goings on of a woman’s uterus is her own business. If she wants to have 1 child or 13. That is between her, her partner, and sometimes maybe her doctor. I could go on but society you get the picture.

To other parent’s I want to let you know you are doing a great job, and I wish society would tell you that more often. If other people’s comments start getting you down just remind yourself to chuck it in the f$%^ck it bucket, and then move on. I know it can be hard, but it will be worth it. Also, as a parent if you do run into a situation where another parent is doing something that might bring harm to their child then you should say something. An example, if a parent posts a picture of their child in a car seat but the child is not properly restrained then say something, but in a nice way. Or if another parent is wearing their child improperly in a baby carrier. Then nicely try to say something to them. Let them know you are also a parent and just want to help. (Basically do a compliment sandwich.) Don’t be rude about it or write hurtful things. As parent’s we should be respectful of others and use common sense.

Let’s bring back a sense of neighborly community to our society. We are all parents trying to raise our children the best we can with what we have. Being a parent is already hard. Let’s not make it harder.

Parenting Is Hard, and Our Society Make’s It That Much Harder
FacebookTweetPin

One thought on “Parenting Is Hard, and Our Society Make’s It That Much Harder”