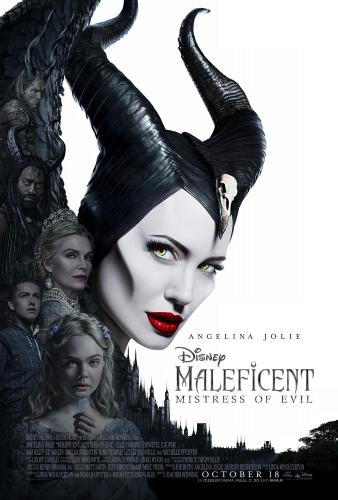 Angelina Jolie is back to reprise her role as Maleficent. If you remember the first movie, Maleficent, which came out in 2014 it was the telling of the story of Sleeping Beauty, but from Maleficent’s perspective. We learn about her life, what led her to curse Aurora, and in the end how she came to love Aurora, her little beastie. But just like in Frozen where you can’t marry a man you just met it seems in Maleficent you cant find true love with someone you just met either. We learn true love’s kiss does wake Aurora from her slumber, but it doesn’t come from Prince Phillip. It comes from Maleficent and a mother’s love. Fast forward to Maleficent: Mistress of Evil, and we see the continuation of Aurora’s and Maleficent’s relationship and their story.

While I try my best not to include spoilers in my reviews sometimes light ones do happen. If you are looking for an absolutely non-spoiler review of Maleficent: Mistress of Evil you can check out my short spoiler-free review for Geek for E HERE.

Maleficent: Mistress of Evil takes place 5 years after the first movie. Aurora (Elle Fanning) is Queen of the Moors, and Maleficent (Angelina Jolie) is still feared throughout the land. For some reason, no one seems to know that even though Maleficent had cursed Aurora she was also the one who saved her. Aurora and Prince Phillip (Harris Dickinson) are still in love and plan to marry. Finally uniting their two kingdoms in peace. Which means it is time for the in-laws to meet. Haha!

At a dinner celebration in honor of the engagement Maleficent comes face to face with Prince Phillips Mother, Queen Ingrith (Michelle Pfeiffer), and Father King John (Robert Lindsay) of Ulstead. But Queen Ingrith isn’t there to celebrate the engagement or the possibility of peace between the kingdom of Ulstead and the Moors. Words are exchanged, battle lines are drawn, and Aurora’s relationship with Maleficent is thrown into turmoil. War comes to Ulstead and the Moors, and no one is safe.

As sequels go Maleficent: Mistress of Evil is pretty good! Actually, I think it’s better than the first. It is a lot darker than the first as well. (I feel Disney has been trending more towards darker movies lately.) But it has a lot going for it. Relationships rule in the movie, and just go to show you do not have to be related by blood to be family. Watching the relationship between Maleficent and Aurora, and also Diaval the raven (Sam Riley) was fun to watch.

Other high points were the one-liners and deadpan humor of Maleficent and Queen Ingrith causing the movie to actually be pretty funny. Of course, as with most Disney movies nowadays the animation and cinematography is excellent. It’s a beautiful movie, with stunning costumes, and powerful female leads. One thing that did surprise me was the amount of violence in the movie. I expected some, but there was a lot.

Now, having said all of that I give Maleficent: Mistress of Evil a solid B rating. It’s not the movie of the year, but it is an entertaining feel-good movie none the less. It’s one of those movies you can watch over and over and be entertained every time. I do suggest buying some popcorn and seeing it on the big screen, but if you wait till it comes out on digital thats ok too.

So is it safe for kids? Even though Maleficent: Mistress of Evil is rated PG I feel Disney really stretched that rating. Due to the kind and amount of violence in the movie, I don’t recommend this movie for really young kids. Maybe take the older kids, but leave the younger ones at home.

Maleficent: Mistress of Evil comes out on 10/18/19. Once you see it I would love to know your thoughts. Let me know in the comments. If you are looking for a movie the whole family can watch make sure you check out my review of Abominable HERE.