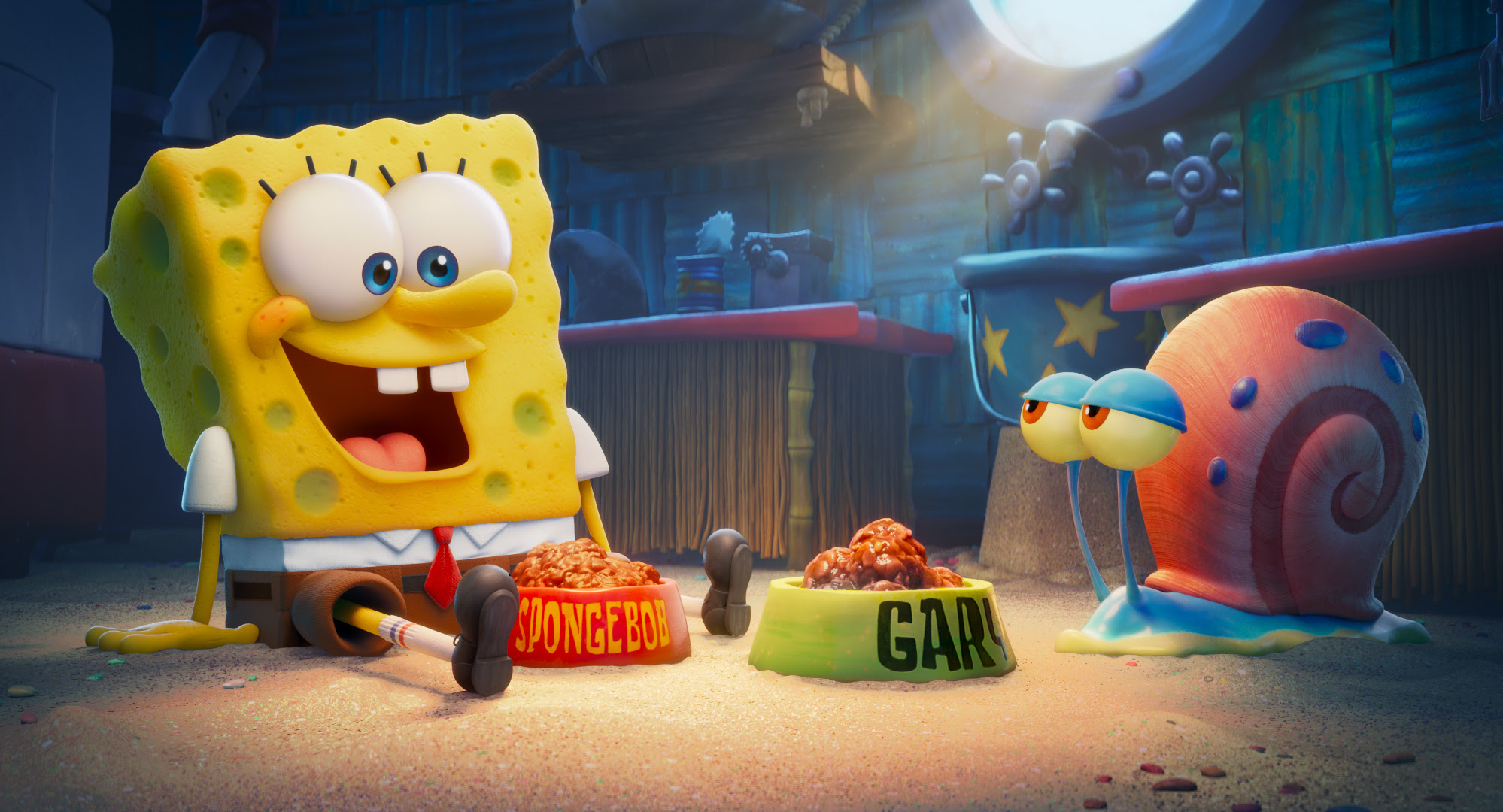 Back in November of 2019, I was able to be one of the first people to screen the new The SpongeBob Movie: Sponge On The Run trailer. (You can read my trailer review HERE.) Back in 2019, my kids were not huge fans of SpongeBob, and I was not too sure if I actually liked the new SpongeBob Movie trailer. Well, let me tell you. A lot has changed since 2019. Haha! My kids are now big SpongeBob fan’s and the trailer grew on me. After being pushed back for a little while The SpongeBob Movie: Sponge On The Run has found a home and now will be available to stream on Paramount+ and on Premium Video-on-Demand on March 4, 2021. I was able to screen it and I have a bunch of thoughts. Here is my spoiler-free review!

I do not know what is going on with The SpongeBob Movie: Sponge On The Run. Haha! It’s crazy, but I feel it is 100% SpongeBob. The CGI animation is so beautiful and colorful. When you look at it you don’t want to take your eye’s off of it, but then they mix in the real world and the feeling is gone. Haha! The movie has caused a big discussion in my house. My kids love it, and have asked to watch the movie almost everyday since we first watched it. I loved the first half of the movie, and my husband couldn’t finish watching it.

The best thing about The SpongeBob Movie: Sponge On The Run is the animation. The animation is beautiful and vibrant. I really wish they had stuck to just animation throughout the whole film, but I do understand SpongeBob’s history of adding real-world locations to his adventures.

What is not beautiful or vibrant is The SpongeBob Movie: Sponge On The Run story. Haha! Even all of the amazing character cameos cannot save it. (I love you Keanu!!!) I am really scratching my head as to what the writers were thinking when they wrote the middle part of the movie. They could have eliminated the middle part, or real-world scenes, of the movie and it would have made the movie much better.

It just didn’t work, or make sense, with the rest of the movie. Then there was a part of the movie that was basically a long ad for the new Kamp Koral: SpongeBob’s Under Years show. (More to come on that show.) It was too long, and my kids lost interest. They eventually came back when it was over. Again, it seemed like that section of the movie just didn’t fit. My kids did cheer at the end of the movie for SpongeBob, Gary, and all of Bikini Bottom.

The original cast of the SpongeBob TV Show returns for the movie. Tom Kenny as SpongeBob, Bill Fagerbakke as Patrick, Clancy Brown as Mr. Krabs, Rodger Bumpass as Squidward, Carolyn Lawrence as Sandy, and Mr. Lawrence as Plankton. They are just as good as ever. The movie does have some new characters. Awkwafina as Otto, Matt Berry as Poseidon, and Reggie Watts as Chancellor. Then you have all of the cameo appearances. I do not want to spoil them, but Keanu Reeves is a big one, and he made the movie for me. Haha!

My Rating, and is it ok for kids?

I give The SpongeBob Movie: Sponge On The Run a C+. Even though the movie had great cameos, and amazing CGI animation, half of the movie made no sense and just dragged on. However, my kids love it, and tons of other kids will as well. Lastly, for the most part, the movie is ok for kids, but if you have kids that are sensitive to zombies then there is a good 10 minutes of the movie that you should be careful with. (It is the only part of the movie my 3-year-old will not watch. She says it’s too scary.)

How you can stream The SpongeBob Movie: Sponge On The Run on Paramount+

CBS ALL Access is switching to Paramount+, and where you will be able to watch the new SpongeBob movie when it releases on 3/4/2021. Right now the cost for Paramount+ is $59.99/1 year with commercials. If you would like no commercials it will cost $99.99/1 year but you will also be able to download videos and play them offline. Currently, Paramount+ is running a special where if you sign up before 3/3/2021 you can save 50% off of your membership for the first year. Make sure you check out the Paramount+ website.

In the first-ever all CGI SpongeBob motion picture event, THE SPONGEBOB MOVIE: SPONGE ON THE RUN, SpongeBob SquarePants, his best friend Patrick, and the Bikini Bottom gang star in their most epic adventure movie yet! When SpongeBob’s beloved pet snail Gary goes missing, a path of clues leads SpongeBob and Patrick to the powerful King Poseidon, who has Gary held captive in the Lost City of Atlantic City. On their mission to save Gary, SpongeBob and his pals team up for a heroic and hilarious journey where they discover nothing is stronger than the power of friendship.

The SpongeBob Movie: Sponge On The Run Review
FacebookTweetPin