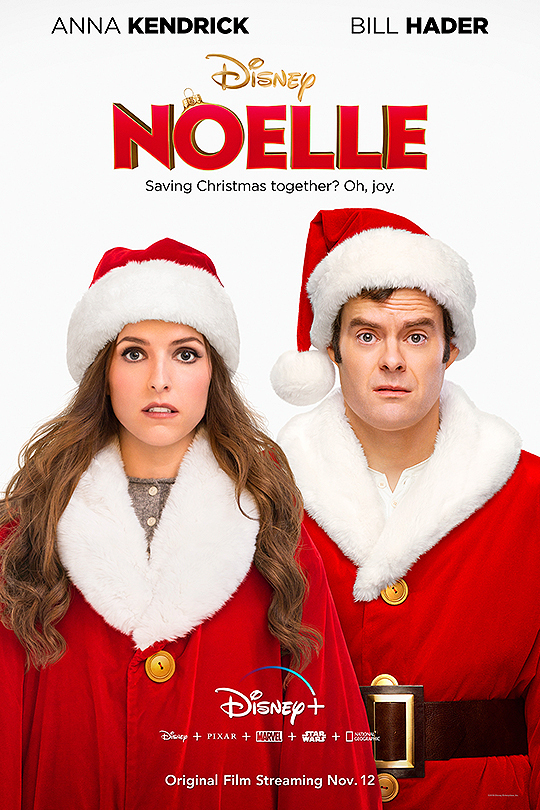 The Most Magical Time of the Year

That’s right. It’s Disney+ time, and Holiday movie time!!! If you are a Disney fan you have been waiting a long time for Disney+ to come out. If you are a fan of the Holiday’s you have also been waiting a while. Add those together and for some, it has been a hard year. Haha! But Disney+ is about to start streaming, November 12th, and one of the movies you will be able to watch when it goes live is the Christmas movie, Noelle. But will the movie make your Christmas merry and bright? Well lucky you, I was able to see an advanced screening and here’s my review!

Noelle Kringle (Anna Kendrick) loves Christmas. She is, after all, Santa’s daughter. She also loves to help her brother, Nick Kringle (Bill Hader) Santa’s heir, out around the North Pole. She has dreams of holding a greater role than just supporting her brother though. But Santa’s have always been male, and when Noelle’s father passes away her brother Nick takes up the mantle of Santa. Buckling under pressure Nick goes on sabbatical causing Noelle to leave home to find him and bring Santa back before it’s too late. Also starring Billy Eichner as Gabriel Kringle, Shirley MacLaine as Elf Polly, Kingsley Ben-Adir as Jake Hapman, Julie Hagerty as Mrs. Claus, and Diana Maria Riva as Helen Rojas.

I laughed, I cried, and I felt the Holiday spirit watching Noelle. Anna Kendrick and Bill Hader shine in this super fun Christmas movie. I will say it is your typical Christmas movie, but at the same time, it isn’t. Noelle busts stereotypes when it comes to Santa Claus and shows us anything is possible when you decide to stand up for yourself and your dreams. (Especially as a woman.) The only slight downside to the movie, for me, was Billy Eichner’s character, Gabriel Kringle. He was funny as he usually is in his roles, but I felt he wasn’t used to his full potential in Noelle. When you have a great actor like Billy Eichner you better use him to his full potential. Haha!

I give Noelle an A. It is another movie that will be on Disney+ that I feel could have been released in theaters. The acting, story, and delivery of the movie is spot on and will have you watching it over and over. Noelle will become a holiday movie favorite.

Yes! Noelle is rated G and a Holiday movie the whole family can enjoy. It has many important lessons to teach such as supporting your family, that traditions change (and that’s ok), to stand up and believe in yourself, and reminds us the Holiday season is about giving. I can’t wait to watch it with my kids.

Get your yogurt pants ready, and grab your hot cocoa. Noelle starts streaming on Disney+ Nov 12, 2019

If you are looking for another family-friendly movie to stream on Disney+ make sure you check out my review of Lady and The Tramp HERE.