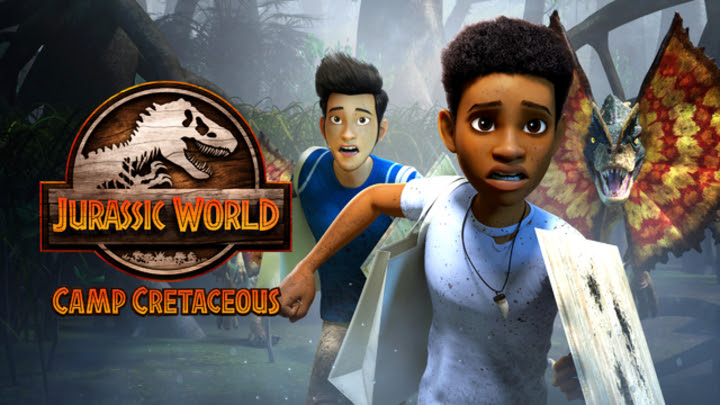 It’s been a long journey, but at the end of Season 3 of Jurassic World: Camp Cretaceous, or JWCC, the campers, Darius, Brooklynn, Kenji, Samy, Ben, and Yaz finally made it off Isla Nublar. (Whew!) But of course, there would be no JWCC if the kids made it home. Haha! Season 4 starts off right away with a bang and personal revelations from some of the kids, and the rest of the season is non-stop. While season 1 is my all time favorite, season 4 is a close 2nd.

I mean these kids have been surviving on their own for 6 months, or more, but in season 4 we get to finally start seeing what the constant survival mode is doing to the kids. Especally with Yaz. I love Yaz’s (Kausar Mohammed) character arc and the writing for her this season. We also get to learn alittle bit more about Kenji (Ryan Potter) and Brooklynn ( Jenna Ortega). I also love the twists and turns in the writings/story telling. There are a couple of times I gasped and was surprised when watching this season. If you are a fan of Jurassic World you will not be disappointed.

What about the Dino’s?

What would JWCC be without Dinosaurs. Haha! Of course we get to see some amazing dino’s. Even baby one’s! But this season the campers have a lot more to deal with then just dino’s. (I don’t want to spoil anything.) These new obsticles really test the group as a whole and individually. Season 4 is definitly setting us up for a HUGE season 5, and I cannot wait to see what JWCC has in store for us.

I love how consistently good JWCC is every season. As a Jurassic Park and World fan I love how they have done the show and kept the heart of Jurassic Park/World alive in it. Even though the show is slightly repedative each season the writers still figure out ways to surprise viewers. I give JWCC Season 4 a solid B+.

JWCC is rated TV-Y7 and can be scary for some young viewers. There is ALOT of peril, some scary dino’s, and in season 4 there is some violence that does occur towards some dinosaurs, and it may be hard to watch for some. (Haley Joel Osment joins the cast as Kash Langford, and his character has some anger issues.) Younger kids may not understand what is happening to the dino’s so parents might need to explain it. (Heck some of it was hard for me to watch, and I had to explain what was happening to my 6 year old.)

Finally escaping Isla Nublar, the campers find themselves in grave danger when shipwrecked on a mysterious island. As the group begins to uncover the strange secrets of this new land, they must hatch a plan to not only save themselves but also protect the dinosaurs from the sinister forces at work.