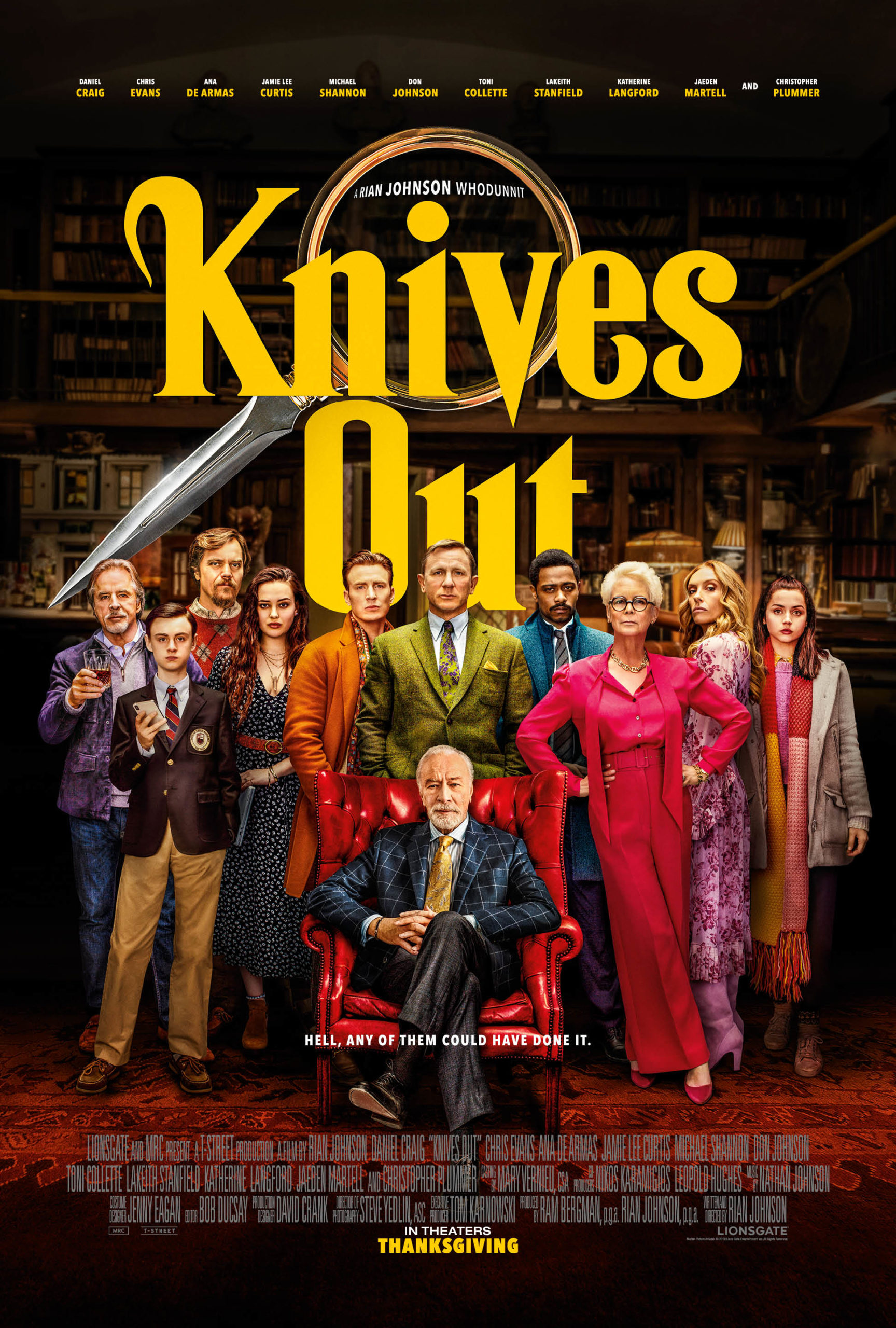 It’s Always Interesting When The Family Get’s Together

You might feel all the nights staying up reading Nancy Drew and The Hardy Boys prepared you for Rian Johnson’s new film, Knives Out, but you would be wrong. Haha! It was really those extended family dinners. Just kidding, but for real we all know family relationships can be complicated. (Some of you might be thinking that’s an understatement. Haha!) Relationships can get even more complicated when family members work with, or for, each other. Throw in lots of money and you just got yourself a perfect storm right there. This is exactly what writer and director Rian Johnson did with his new film, Knives Out. Read below for my review of the whodunnit movie of the year. Knives Out is in theaters now.

While I try my best not to include spoilers in my reviews sometimes light ones do happen. If you are looking for an absolutely non-spoiler review of Knives Out you can check out my short spoiler-free review for Geek for E HERE. Also, I do not have a “Safe for Kids” section for this movie. While Knives Out is rated PG-13, due to the amount of language and violence I highly recommend leaving the kids at home.

To be honest I was unsure going into this movie. I like whodunnit movies, but most of the time I either figure out who the killer is pretty early, or the film drags on and on. I had neither of these issues with Knives Out. In fact, I feel Knives Out is a spectacular movie. Chris Evans and Daniel Craig are ridiculously funny in both of their roles and are given some of the best lines in the movie. While I love Marvel movies it was refreshing to see Chris Evans in a different kind of film, and I have a feeling Aran cable-knit sweaters are going to be popular this holiday season.

For Daniel Craig, I have to give him credit for his accent. I was first taken aback by his southern accent but soon realized there was no way his character would have been as funny if he didn’t have it. His accent in a way tied the movie together and made it better. (I did consult with my sister who spent many years in Alabama to see how Daniel Craig did on his accent and she said he did a pretty good job. Haha!)

But what about the story? The story has multiple layers, and once you feel you figured out something another layer is there to keep you guessing. Some will probably be able to figure out whodunnit before the movie ends, but the movie is such an entertaining piece of cinema it won’t matter.

So, what rating do I give Knives Out? I give it a solid A. It is highly entertaining, but I feel they could have put in one more twist to keep you guessing making it harder for people to guess who did it. Also, some of the characters could have been developed more. (Such as the grandchildren.) I don’t normally watch movies multiple times in the theaters, but I will be going back to the theater to see Knives Out again soon, and then go grab a donut afterward.

Have you seen Knives Out? What did you think? Let me know in the comments. No spoilers!

If you are not a huge fan of whodunnit movies make sure you check out my review of Terminator: Dark Fate HERE, or if you are more of an animated film fan my review of Frozen 2 HERE.

Knives Out Review: The Whodunnit Movie of the Year
FacebookTweetPin