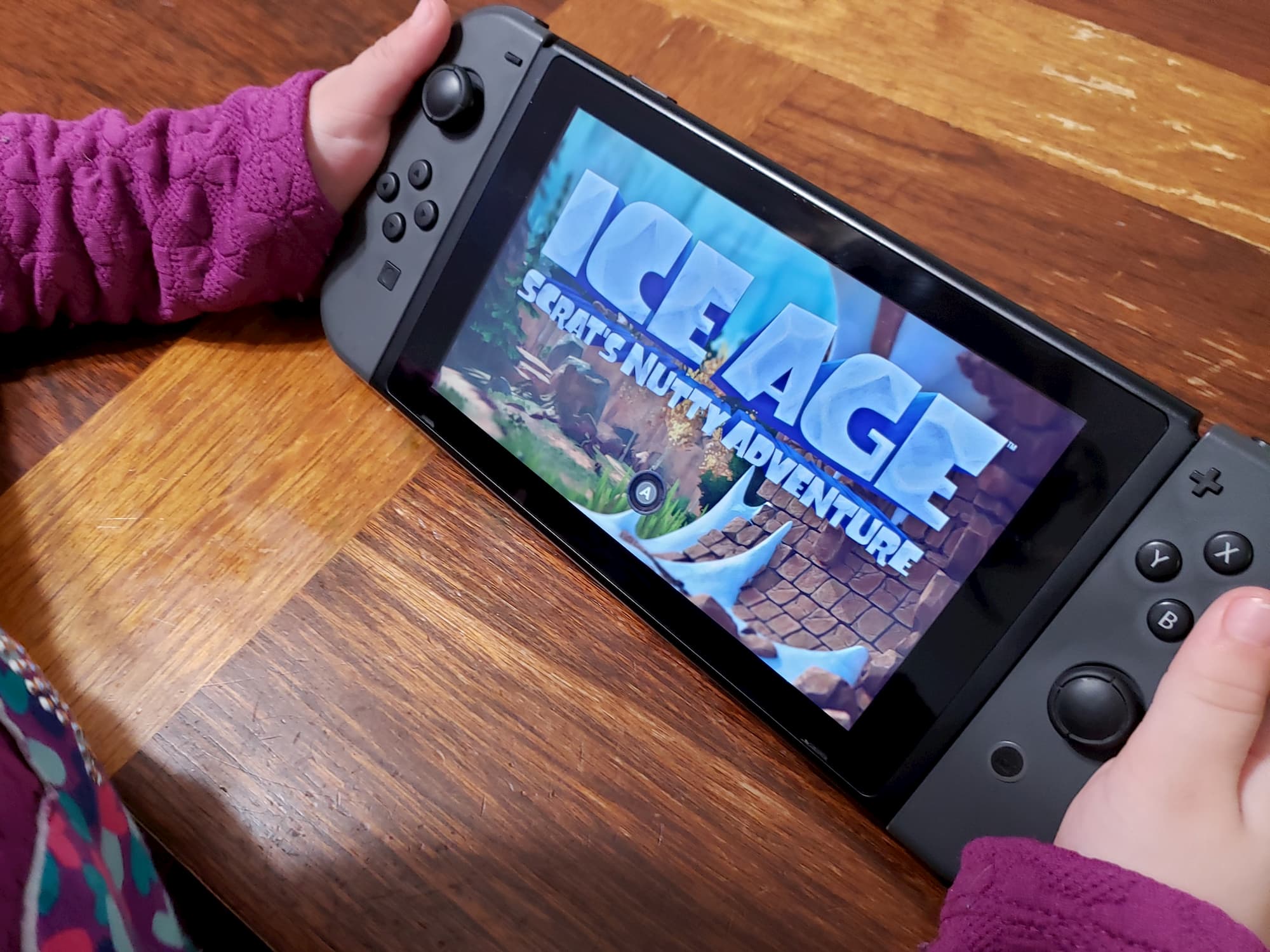 Gaming With My Kid

My 4-year-old has recently become a fan of our Nintendo Switch. She has learned the in’s/out’s of how to navigate to her favorite games, and also how to get it to show on the big TV. (It was quite a surprise when I saw her do it. Haha) I have discovered it is so much fun to sit down and play video games with her and watch her learn. Her reactions to elements of the games, such as “Dying” and re-spawning, is priceless. So, when I was asked if I would like to try out Scrat’s Nutty Adventure I was all in. My daughter loves the Ice Age movies and I love the bonding time I get with her when we play video games together so it was a win-win.

Disclaimer: This is a sponsored post. I was given 2 copies of the game. 1 for us to play and review, and 1 to giveaway. All thoughts and opinions are my own. Giveaway details are provided at the end of this post.

Scrat, the hilarious saber-tooth squirrel from the Ice Age movies has lost his acorn, and he must go on a quest to recover it from the ancient Scratazon Temple.

Some of the things I looked for when playing this game were ease of play, violence, game hiccups/areas of improvement, and how much my child actually enjoyed playing it. So, let us start with ease of play.

My daughter is only 4-years-old so she is still learning how to really use gaming controllers. It is a lot of hand/eye coordination and also learning and remembering what all the buttons do. But, Scrat’s Nutty Adventure is pretty easy when it comes to controller use. (Not like mortal combat where you have to do all the combos. Haha!) There are some parts of the game that are difficult for her. Currently, she is in a part of the game that requires a lot of jumping from place to place and it’s hard for her.

She doesn’t quite have the timing right, but also I feel this is an area where the game is just difficult and maybe off a little bit because both my husband and I also have difficulty with jumping onto things. Puzzle wise she needs help, but we remind her it’s like doing a jigsaw puzzle at home and she pretty much directs us on how to solve it. Haha!

What I like about Scrat’s Nutty Adventure is while the game does contain a slight bit of violence there is no blood or gore. To defeat “bad guys” or to retrieve gems/hearts you do have to kick and throw nuts. My 4-year-old is really good at kicking and defeating the bugs in the game. Haha! Higher up “boss” type fights are a little outside her abilities, but she enjoys watching Mom or Dad defeat them.

For me, personally, there are 2 areas I feel the developers for Scrat’s Nutty Adventure could have done a better job. The first area is jumping. Like I mentioned all 3 of us had a hard time getting Scrat to jump. It was like there was a lag or the timing was off when it came to jumping onto things. (Possibly also a Nintendo Switch issue?) The second area is the camera work and you could run through areas, like rocks, that in my mind you really shouldn’t have been able to do. (Sometimes it was like Scrat was a ghost just running through walls. Haha!)

Did My Child Enjoy the Game?

While Scrat’s Nutty Adventure isn’t the best game out there my 4-year-old enjoys it. (I give it a 3/5) As stated above she has her moments where she is not skilled enough to be able to play the game and needs help, but she is learning. She loves the Ice Age movies so she thoroughly enjoys playing as the Scrat character, and the game is not scary for her. The game is rated E for Everyone, but I think older kids around 6 or older may be the sweet spot for this game.

Ice Age Scrat’s Nutty Adventure is out now and available on the following platforms: PlayStation 4, Nintendo Switch, Xbox One, Microsoft Windows. If you are looking for another kid-friendly game make sure you check out my sneak peek of the new Spies in Disguise mobile game HERE.