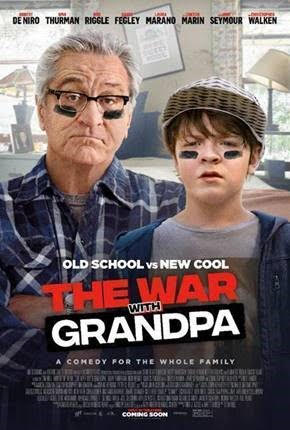 The War with Grandpa

If you are looking for a family-friendly movie for your next movie night then look no further than the new movie The War with Grandpa. Out in theaters now, The War with Grandpa is a movie many families can relate with. Before heading to the theaters to see it make sure you read my spoiler-free movie review below!

My Review – The Good

If you have seen the previews for the movie then you know it is about a family where the Grandpa moves in and gets into a turf war with his Grandson over a room. You might have even read the book the movie is based on. (I love it when books are made into movies.) The movie is a cute and relatable concept. Nowadays many families have multiple generations living under one roof and having/keeping your own space can be hard. Especially for kids. The War with Grandpa does a good job exploring the feelings kids may have when they feel their space is being invaded.

On the flip side, I feel like The War with Grandpa also captures growing older perfectly for the older generation. I cannot tell you how many times I have talked with my own parents who have complained about some of the same things Robert De Niro’s character, Ed, complained about. Shopping and having to use the self check out counters, and it not going well. Haha! Along with the feeling of not wanting to be a burden for/on their kids. Speaking of Robert De Niro, The War with Grandpa contains an amazing all-star cast that includes heavy hitters such as Jane Seymour, Cheech Marin, Christopher Walken, Uma Thurman, and Rob Riggle.

The War with Grandpa is a cute movie, but it does have it’s drawbacks. The movie is full of clichés when it comes to family and individuals. Some even made me cringe a little bit. Also, some of the funniest parts of the movie are not even shared between the two main characters, Peter (Oakes Fegley) and Ed (Robert De Niro). Personally, I feel the funniest moments are actually shared between Rob Riggle (as the Dad) and Robert De Niro. The movie also does not use it’s all-star cast to its fullest potential. So, how do I rate The War with Grandpa?

I give the movie a solid C+. I enjoyed the movie, and it is a refreshingly relatable family movie full of laughs. So, why the C+ rating if I enjoyed it? While funny, enjoyable, and containing an all-star cast, as I mentioned above, the movie does serve up a bunch of cliches. And while I loved the fact the movie hit on multi-generation families living in the same house I wish the movie had also included more diversity in the family unit so as to make it even more relatable for families. I hear there may be a sequel, which intrigues me, and I do hope it is made.

Is the movie ok for kids?

If you go see The War with Grandpa Let me know how you liked the film in the comments!

Interview with the Cast and Producers of The War with Grandpa

Want to learn some behind the scenes info for the new movie The War with Grandpa you click HERE to watch the press junket where we got a chance to interview the actor’s Laura Marano, Oakes Fegley, Jane Seymour, Cheech Marin, and the filmmakers/producers Tre, Marvin, and Rosa Peart.

Sixth-grader Peter (Oakes Fegley) is pretty much your average kid-he likes gaming, hanging with his friends and his beloved pair of Air Jordans. But when his recently widowed grandfather Ed (Robert De Niro) moves in with Peter’s family, the boy is forced to give up his most prized possession of all, his bedroom. Unwilling to let such an injustice stand, Peter devises a series of increasingly elaborate pranks to drive out the interloper, but Grandpa Ed won’t go without a fight. Soon, the friendly combatants are engaged in an all-out war with side-splitting consequences.

It's a @DCTitans kind of night.

Is it Friday yet? #WandaVision

One of the reasons I love wanda in #WandaVision and also Thor in #Endgame so much is because even though they are powerful beings #marvel shows they can still be sad and depressed. It humanizes them even more, and makes their stories that much more compelling. #SaturdayThoughts

Wanda and Vision. The greatest love story ever told. 😭😍 #WandaVision