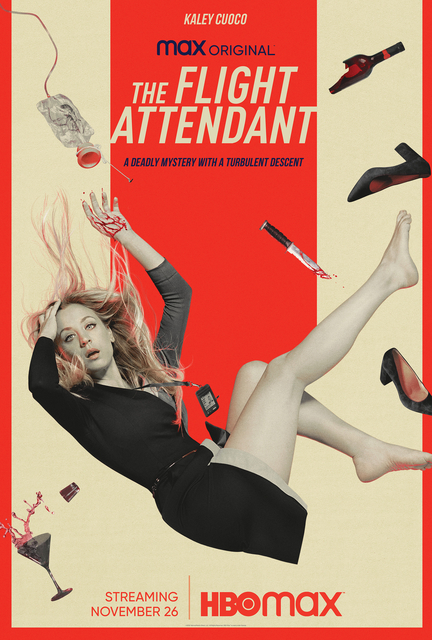 Do you love murder mysteries? I do, and the first show I binged on HBO Max is The Flight Attendant starring Kaley Cuoco. I didn’t know what to expect when I started watching it but it is such a good show! Warning though, Kaley Cuoco does play a character, Cassie, who is a very bad alcoholic and I feel the show may be triggering for some. (Blackout drunk, etc.) But if you are looking for a dark and slightly funny show that will make you think, then The Flight Attendant is just the show for you. Here is my review. (P.S. I won’t ruin the whole show for you, but there may be some spoilers in my review.)

I have to hand it to Kaley Cuoco. She blew me away in The Flight Attendant. I do slightly feel Kaley has been type-cast as a drunken person, but she really stepped up and showed her acting range in this show. I loved how the story really got into Cassie’s (Kaley Cuoco) head and delved into her psyche. When Cassie goes through her trauma she re-creates her one-night stand, Alex (Michiel Huisman), in her mind and he really comes off as a visual manifestation of her ego.

He helps her remember her childhood, works through her addiction, and helps her solve his murder. So that whole part of the storytelling was amazing to me. I love getting into people’s heads. One of the downsides to the show was I was able to figure out who killed Alex before it was revealed, but I watch a lot of murder mystery movies/tv-shows so it didn’t surprise me too much.

Cassie isn’t the only one with problems

Nope, there is more. Haha! Rosie Perez stars as Megan, who is a Flight Attendant along side Cassie, but also a wife and mother. Megan’s character is not happy with her life at home, feels overlooked and is bored, and gets herself into some really big trouble. While I do not agree with what Megan’s character did in the show I understand her feelings. Sometimes we feel the grass is greener on the other side. But the show is a great reminder that sometimes other people have just spray painted some dirt green and in reality, it is not better than what we have. Rosie is a fantastic actress and another downside to the show is I feel they did not use her to her full potential in this season, but it did seem like they were setting her character up for bigger things in the next season.

If you watch The Flight Attendant I would love to know your thoughts on the show. Drop them in the comments!

Starring Kaley Cuoco, THE FLIGHT ATTENDANT is a story of how an entire life can change in one night. A flight attendant (Cuoco) wakes up in the wrong hotel, in the wrong bed, with a dead man – and no idea what happened. The dark comedic thriller is based on the novel of the same name by New York Times bestselling author Chris Bohjalian.

Season 2 of The Flight Attendant is coming!

After I finished binging season 1 of The Flight Attendant I got a very exciting email from HBO Max! “HBO Max has renewed the hit comedic thriller THE FLIGHT ATTENDANT starring Kaley Cuoco for a second season. Season one was based on the novel of the same name by New York Times bestselling author Chris Bohjalian and told the story of how an entire life can change in one night. Flight attendant “Cassie Bowden” (Cuoco) woke up in the wrong hotel, in the wrong bed, with a dead man – and no idea what happened. The season also starred Michiel Huisman, Rosie Perez, Zosia Mamet, Michelle Gomez, T.R. Knight, Colin Woodell, Merle Dandridge, Griffin Matthews and Nolan Gerard Funk. Season two will feature Cassie in a new adventure.” Once more information on the second season comes out I will let you all know!

If you are looking for more content to watch on HBO Max then make sure to check out my review of Wonder Woman 1984 HERE.