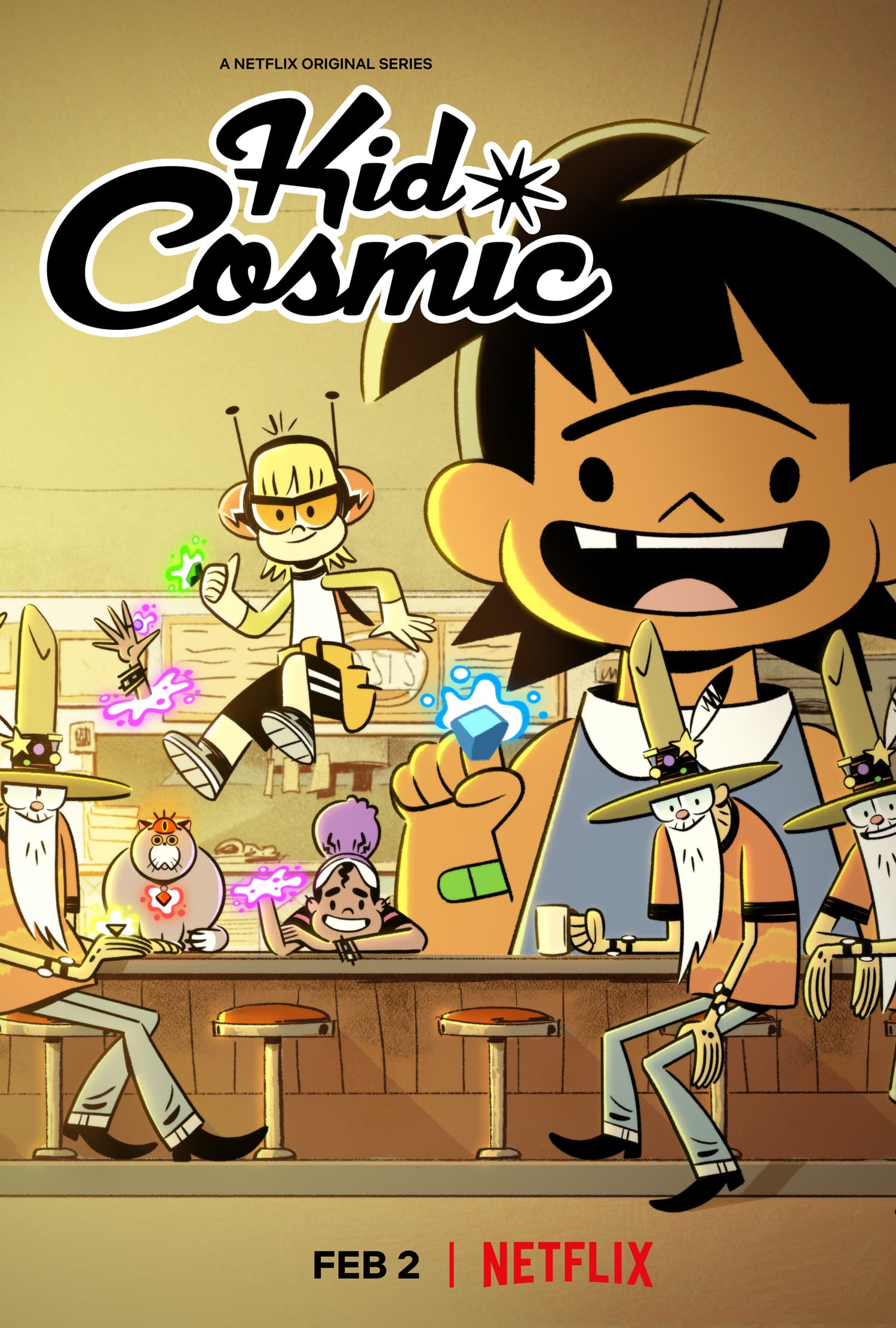 Kid Cosmic to the rescue!

Are you ready for 10 episodes of high flying alien butt-kicking fun? I got a chance to screen Netflix’s new show Kid Cosmic and I think your comic book-loving kids are in for a treat. Kid Cosmic lands on Netflix on February 2, 2021, but you can read my season 1 spoiler-free review below!

So, when I saw previews for Kid Cosmic I got excited because I thought it would be a show my kids would like. Little did I know I would like it more than them. HAHA! (And that is ok.) Kid Cosmic is an action-packed show filled with a lot of heart. The show centers around a kid who loves comic books and wants to be a hero so badly. (You find out the tragic reason he wants to be a hero as you progress through the season.) He finds alien Stones of Power that brings him power, but he ends up sharing them and forming a ragtag team. Their goal? Fend off others who want the Stones of Power for themselves, and survive. Haha!

So there are 10 episodes in season 1 of Kid Cosmic, and while watching it sometimes it felt they could have made fewer episodes. The story sometimes dragged on, and Kid Cosmic took forever to make his revelation. But I loved the characters they chose for the show. Kid is voiced by Jack Fisher (Blaze and the Monster Machines), Jo by Amanda C Miller (She-Ra and the Princesses of Power), Papa G by Keith Ferguson (DC Super Hero Girls), Chuck by Tom Kenny (SpongeBob SquarePants), and Tuna Sandwich by Fred Tatasciore (The Loud House).

All are amazing actors, and the characters they were cast to play are perfect for them. If I had to pick my favorite characters they would be Jo and Tuna Sandwich. Haha! Almost all of the characters have something to learn throughout the season, and it all comes back to being honest, a team player, and recognizing when you are wrong and fixing it.

The part I loved the most about the show is the animation. Kid Cosmic is done in 2D, but for me, it is just beautiful to watch. I find the colors and comic book look so calming. I spent most of the season watching the animation and feeling it was familiar somehow, and now I know why. The Powerpuff Girls, which I grew up watching all the time (as most my age did haha) and loved was created by Craig McCracken. Who, as it ends up is also the Executive Producer of Kid Cosmic. (Makes me think I have an animation type. Haha!)

I really liked Kid Cosmic. My oldest, who is 5 years old, liked some episodes (some were too scary for her), and it did not keep my 3-year-olds attention at all. Haha! But if you have a kid who loves comic books I think this show will be right up their alley. I give Kid Cosmic a solid B+. I think if the story had been a tad bit better it would have elevated it, but I am excited to see if there is a second season! Kid Cosmic is rated TV-Y7 due to animated fantasy violence, and there is some language.

Who will be watching Kid Cosmic?!

Kid Cosmic follows the adventures of an imaginative and enthusiastic boy who lives with his free-spirited Grandpa in a sparsely populated desert town. The Kid’s dreams of being a hero seem to come true when he discovers 5 Cosmic Stones of Power in a wrecked spaceship. He forms a team of local heroes to stop an onslaught of alien attacks to steal back the stones. Though the Kid and his team are the good guys, they’re really bad at it, and the Kid learns that his fantasy of being a hero is very different from the reality of what it actually means to become one.