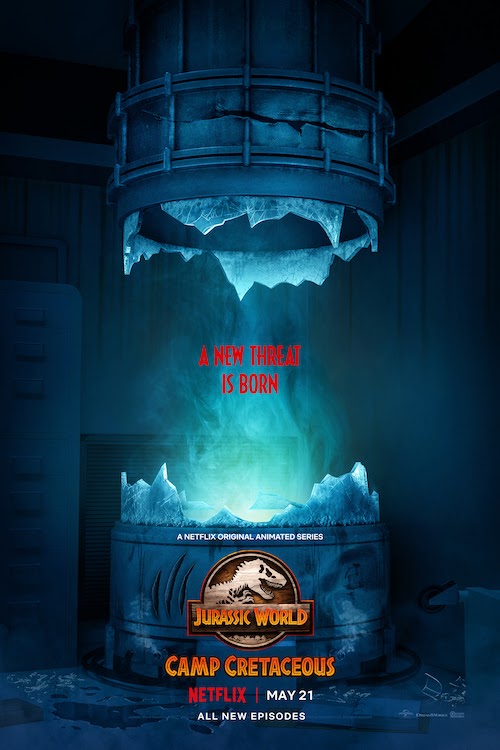 Are you ready for Jurassic World: Camp Cretaceous Season 3?!

All of the campers are back, and so is all of the Dino fun. Like many Jurassic World Camp Cretaceous fans, my girls and I have been waiting for season 3. Over the last 2 seasons, my oldest has gotten so attached to Darius and all of the other campers and she has been so concerned they will never get off of Isla Nublar. Haha! Well, Season 3 of Jurassic World: Camp Cretaceous lands on Netflix on May 21, and we got a chance to screen all 10 episodes which means I have a review for you. (Spoiler-Free of course because I do not want to ruin anything for you!)

I am going to get straight into it. All 10 episodes of Season 3 are crazy. Jam-packed with new Dinosaurs, intense action, and adventure season 3 sometimes makes seasons 1 and 2 feel tame. Haha! (It’s like the show Lost, but for kids and with Dinosaurs. ) Here is a slight season 2 recap if you forgot. At the end of season 2 Darius, Yaz, Brooklynn, Kenji, Sammy, and Ben save a bunch of Dinosaurs from poachers but are still stuck on the island. They have been running from Dinosaurs and trying so hard to get off the island for the last 2 seasons. (Everything these kids have been through makes me feel for them. Haha!)

The characters and cast

I just love all of the characters in the show. Each character is written so well and their stories are so compelling whether they are focusing on just one individual or the team. Each season each character has something to learn and overcome on top of learning how to continue navigating being a team. Season 3 is no different and the lessons on friendship, listening, and trusting others are really important lessons for kids to learn. I love how these lessons/topics are presented and intertwined with all of the Dino drama. Throw in the fact that all of the cast/voice actors are amazing and do such a great job every season. I will say though that the standout actors for season 3, for me, are Raini Rodriguez as Sammy and Kausar Mohammed as Yaz.

But of course you can’t forget the Dinosaurs!

The Dinosaurs in every season of Jurassic World: Camp Cretaceous are always amazing and the amount of action is impressive for a kid’s show. Now, I will say, Season 3 is a lot scarier than the previous 2 seasons. Mainly in Season 3 because of the new Dinosaurs. This can make it hard for younger kids to watch so I would be careful, but for older kids, it will be very entertaining.

The only downside, for me personally, for season 3 is the show is starting to feel repetitive. This is why they probably made season 3 slightly scarier than the previous 2. But after watching season 3 my kids and I have high hopes for Darius, Yaz, Brooklynn, Kenji, Ben, and Sammy. We are hopeful and cannot wait for season 4!

While Season 3 is not my favorite season of the series it is still highly entertaining. It has the scares, jumps, dino’s, and heart-pounding moments that you experience watching the first 2 seasons. Season 3 is, I feel, the scariest of all the seasons so if you have really young or sensitive kids I would suggest watching the show first or watching it with them. Overall, I give Jurassic World: Camp Cretaceous Season 3 a B-.

Are you or your kids a fan of Jurassic World: Camp Cretaceous? How excited are you for season 3? Let me know in the comments!

Still stranded on the island, the campers uncover more details of Dr. Wu’s secret research, and must quickly take their fate into their own hands with a dangerous plan to leave Isla Nublar behind for good. But when a tropical storm delays their departure, a lethal new threat quickly closes in on the campers, placing their escape, as well as their lives, in extreme peril.

If you are a big Jurassic World: Camp Cretaceous fan like me then make sure you check out my interview with Executive Producer Scott Kreamer HERE.