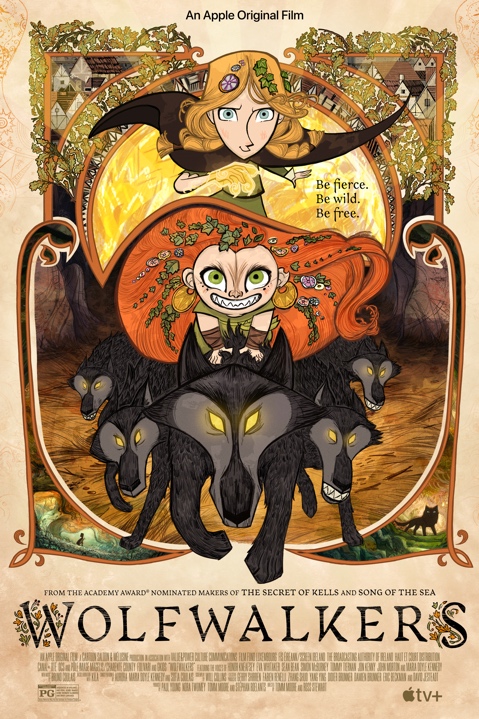 What would you do if you met a girl who was human, but also wolf, and it was your family’s job to hunt down and kill wolves? Would you do what is expected of you, or would you do the right thing? This is just part of the story that is Wolfwalkers. Wolfwalkers released in theaters in November, but you can see Wolfwalkers on AppleTV+ starting on December 11, 2020. Check out my spoiler-free review below!

My Review of Wolfwalkers

But of course a movie is more than just it’s imagery. The Wolfwalkers story is an interesting one that brings Irish folklore/mythology to life, and as an individual of Irish decent and a lover of history and mythology I LOVED the Wolfwalkers story. (Wolves are very prominent in Irish folklore and in fact I see what you did Will Collins with some of the characters last names. Haha!) Wolfwalkers is set during the 17th century colonization of Ireland by England and is packed with lessons to be learned. It is a story of friendship, but also a story with lessons on learning/standing up for what’s right, that just because something is different doesn’t make it evil, and to not let fear control you.

You can have an animated movie that looks spectacular and has a great story, but if the voice actors are terrible it can ruin the whole thing. Especially in a hand drawn animated movie. Wolfwalkers luckily is not one of those movies. Wolfwalkers actually touts an incredibly talented cast. Honor Kneafsey stars as Robyn Goodfellowe, Eva Whittaker as Mebh Óg MacTíre, Sean Bean as Bill Goodfellowe, Simon McBurney as the Lord Protector, and Maria Doyle Kennedy as Moll MacTíre. Honor Kneafsey and Sean Bean are phenomenal and bring so much heart and soul to their roles. Their portrayals had me close to tears as they fought their fears, and to protect what they believed in and loved.

So, does Wolfwalkers have any downsides? In truth I think my only qualm with the movie is at times it seems to drag on making the movie seem longer than it actually is. That’s it!

I give Wolfwalkers a solid A. It is a highly entertaining and beautifully drawn work of art. Is the movie ok for kids? Older kids, ages 7 and up, will probably find the movie entertaining. Younger kids may be slightly scared or not interested. The movie does have some intense fighting sequences and peril.

In a time of superstition and magic, a young apprentice hunter, Robyn Goodfellowe, journeys to Ireland with her father to wipe out the last wolf pack.  While exploring the forbidden lands outside the city walls, Robyn befriends a free-spirited girl, Mebh, a member of a mysterious tribe rumored to have the ability to transform into wolves by night. As they search for Mebh’s missing mother, Robyn uncovers a secret that draws her further into the enchanted world of the “Wolfwalkers” and risks turning into the very thing her father is tasked to destroy.

If you are looking for more to watch on AppleTV+ then make sure to check out my review of Stillwater HERE, and Greyhound HERE.