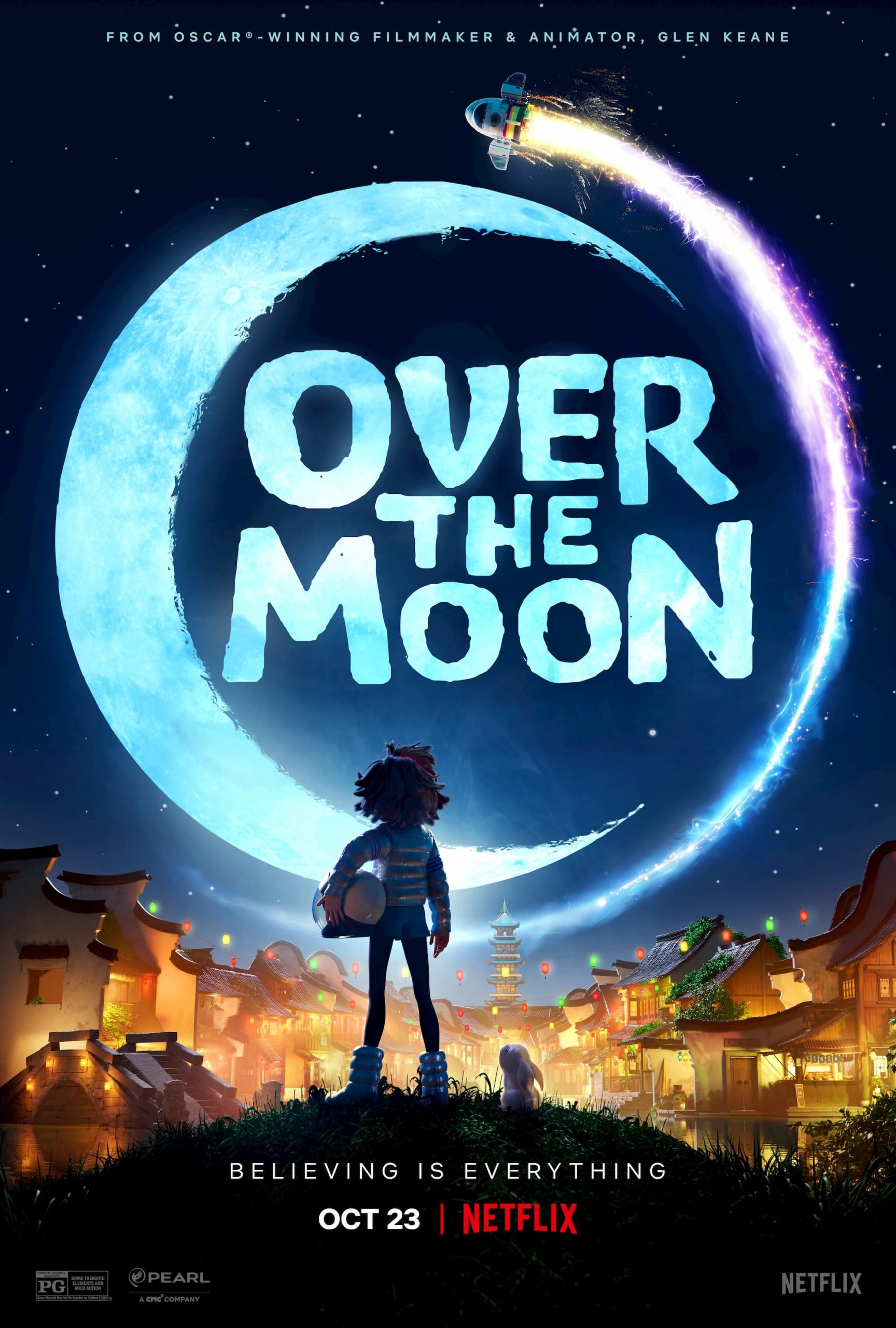 So, I haven’t had Netflix for very long and I am really doubting my reason as to why I didn’t have it before. Every single Netflix production animated movie I have seen so far has been fantastic! And Over The Moon is no different. This is also the second movie from Pearl Studio Productions that I have liked. (The other one is Abominable which you can read my review for that movie HERE.) So, here is my Over The Moon Spoiler-Free Review!

Even though Over The Moon is an animated movie it covers some pretty heavy topics such as the loss of a parent, learning to love again, and learning how to move on even though it hurts. (Whew) I was crying within the first 5 minutes of the movie. Haha! (I never used to do that before I had kids.) But my kids and I loved it! Over The Moon has so much heart and soul in its 1.5 hours, and to be honest life, in general, is not all roses.

So the fact that the movie tackles tough subjects is not a drawback. The movie handles these big emotions perfectly and does a fantastic job of explaining them in a way kids can understand. But even though Over The Moon is slightly heavy it still had us all laughing at the antics of the main characters Fei Fei (Cathy Ang) and Chin (Robert G. Chiu), and their animal sidekicks.

Another surprise about the movie is it is a musical. Oh my goodness. I could listen to the songs from Over The Moon over and over. They are beautiful, upbeat, and tie into the story so well. Because the story is a bit heavy for a kid’s movie the music helps to soothe and uplift the movie. Cathy Ang and Phillipa Soo both sing, and nail all of their songs. Another piece of the movie that makes Over The Moon so good is the animation and use of colors. Without the music and vibrant animation of Over The Moon, it would probably not be as good. Like the music, the colorful animation alleviates the tough subject of the movie and makes it brighter.

If you can’t tell I love Over The Moon. It is a fantastic movie. I give it an A+. As an individual who also loves history, mythology, and legends Over The Moon is a spectacular mix of modern-day and Chinese legend. It does a really great job of introducing new generations and audiences to the legend of the Chinese Goddess of the Moon, Chang’e. If you have Netflix I highly recommend Over The Moon, releasing on October 23, 2020.

Fueled with determination and a passion for science, a bright young girl builds a rocket ship to the moon to prove the existence of a legendary Moon Goddess. There she ends up on an unexpected quest, and discovers a whimsical land of fantastical creatures. Directed by animation legend Glen Keane, and produced by Gennie Rim and Peilin Chou, Over the Moon is an exhilarating musical adventure about moving forward, embracing the unexpected, and the power of imagination. The film stars Cathy Ang, Phillipa Soo, Ken Jeong, John Cho, Ruthie Ann Miles, Sandra Oh, Robert G. Chiu, Margaret Cho, and Kimiko Glenn.