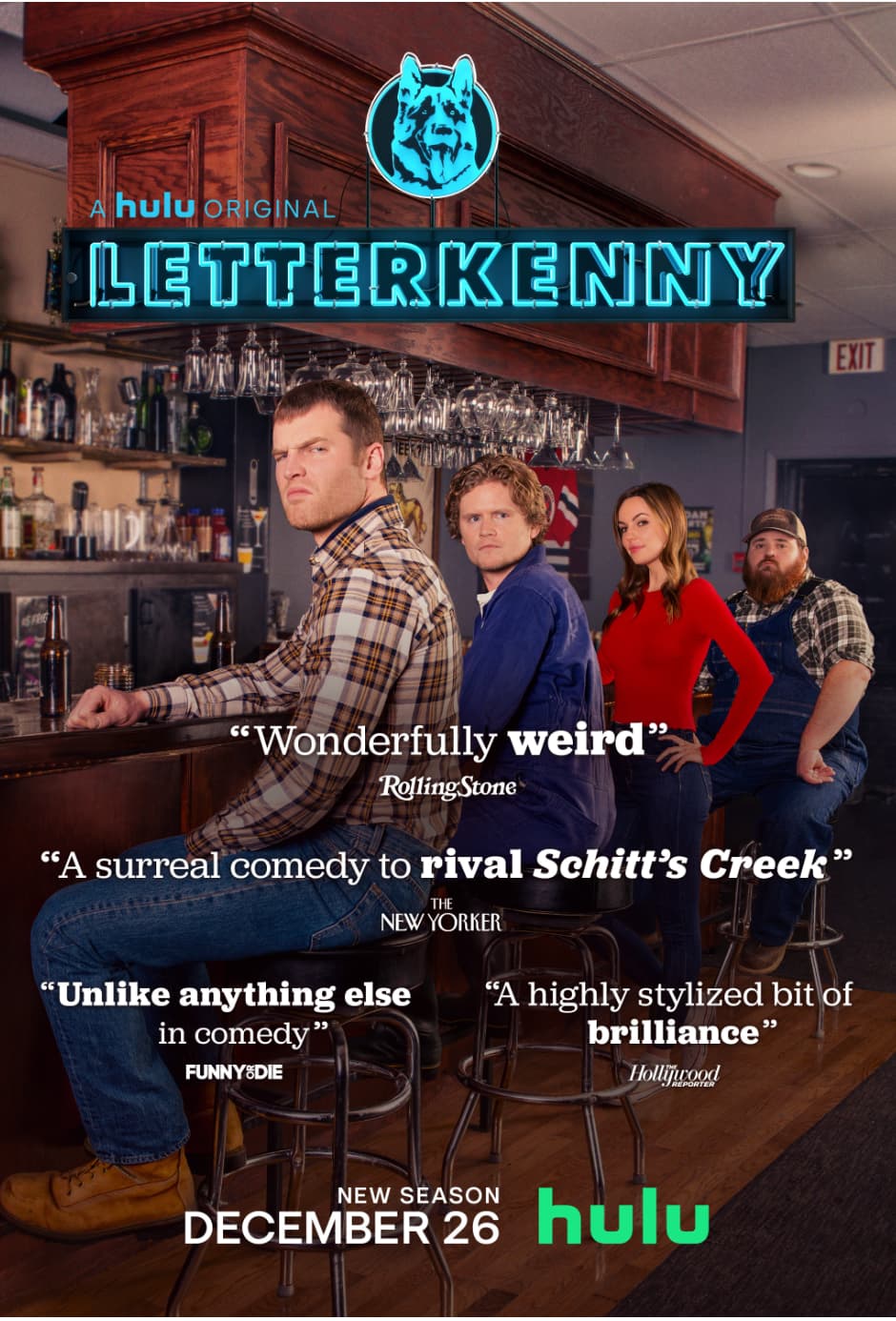 If you have Hulu and love Letterkenny then Merry Christmas! All 7 episodes of Season 9 are available to watch today. (Saturday, December 26.) I was able to screen the season, and Letterkenny fans will not be disappointed. Keep reading for my review.

There are 5,000 people in Letterkenny… and they have, for some reason, a lot of problems. Haha!

ok, ok, to be fair (see what I did there? Haha!), in truth the people in Letterkenny don’t have a lot of problems. They are just a small town full of interesting and bored people. (Half of them I don’t even know what they do for a job. Haha!) I will be honest with you. When I first started watching Letterkenny, thanks to my husband, years ago I did not like it. It actually made me uncomfortable. Haha! But over the years the show has grown on me and I have come to love those rascals. (Wayne, Katy, Daryl, and Squirrelly Dan.) I have found myself using some of their catchphrases in public, and I have come to admire the writers for the show who are genius wordsmiths.

Season 9 is exactly what you would expect. It is hilarious and superbly written. In one episode the gang decides to talk to the teenagers from Letterkenny about their bad behaviors and it is the best sit-down teenage talk I have heard in a while. I will say the season is slightly tamer than others (is that possible?), but there is still a lot of crude back and forth banter to go around. (And I will never think about whistling sounds the same again.) Also, I am excited to see Clark Backo return as Wayne’s love Rosie, and I hope Wayne doesn’t mess it up with her. It is refreshing to not be disappointed by a show that has been on the air for so long. Letterkenny is just as good as when it started, and fans will love the new season.

Do you watch Letterkenny, and are you excited for the new season? Let me know in the comments!

(P.S. interviewing the cast of Letterkenny is on my wish list. I want to know how many takes/how long a scene takes to shoot. Haha! Because there is no way the cast can do their scenes without busting out laughing at some of the things they have to say to each other.)

LETTERKENNY kicks off post-fight with Dierks (Tyler Hynes), and the Hicks, Skids, and Hockey Players attend an American Buck and Doe. Katy (Michelle Mylett) takes her scorched earth dating strategy back to Letterkenny and Gail (Lisa Codrington) gets some action of her own. Meanwhile, The Hockey Players learn about Judaism and the whole town gets really into sleepover activities like movies, board games, and girl talk. Then, a competing restaurant opens in Letterkenny and Tanis (Tiio Horn) starts her own energy drink.

If you are looking for another hilarious show to binge on Hulu make sure you check out my review of the new Animaniacs HERE.