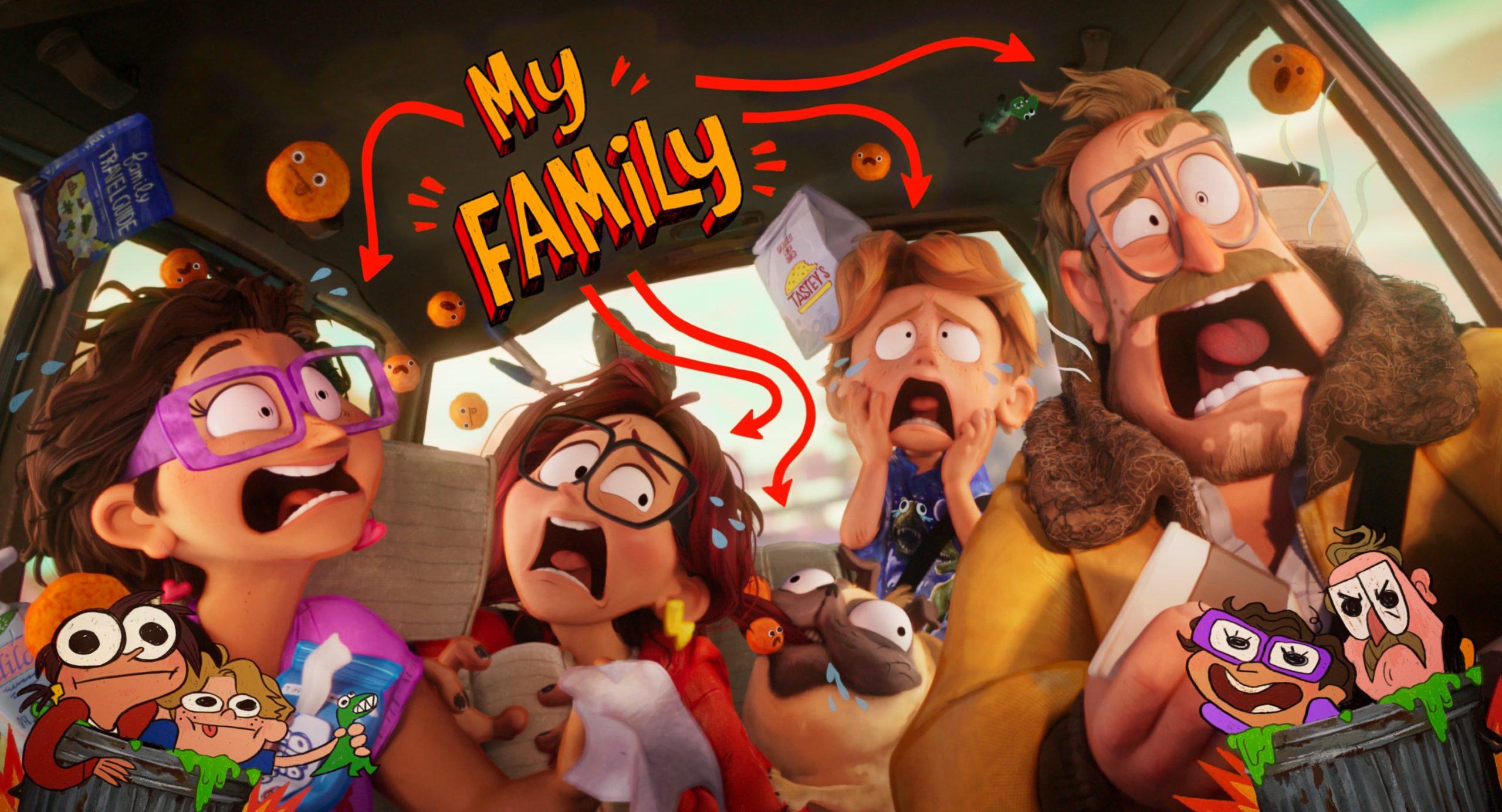 My The Mitchells vs The Machines Review

Here’s the short of it. The Mitchells vs The Machines is the most epic family road trip movie I have seen in years. I love it so much and it is totally worth the wait and changes. (It was originally set to release in 2020 under the name Connected.) The movie is fun, weird, hilarious, and heartwarming all at the same time. All of the characters are so relatable, and it’s like they took my family and put them in the movie. Haha! I am blown away by the animation, the story, and how you can feel the love and effort put into the movie. Hands down the best family movie I have seen so far this year. Now here’s the long of it. Haha!

It is really hard for me to find something about The Mitchells vs The Machines I do not like. As a parent, the story hit’s me in all of the feels. Katie (Abbi Jacobson) has felt her whole life like no one understands her, and she doesn’t fit in. She loves to make movies and is pretty good at it, but her parents, especially her father Rick Mitchell (Danny McBride), don’t really have the same interests and don’t fully understand Katie’s passion. On the flip side, Katie doesn’t 100% understand her father and what he has given up for his family. What parent cannot relate to this situation?

Throw in robots trying to take over the world, and the Mitchells have to learn from and about each other to be able to survive and try to help save the world. The movie is a prime example of what parents will do or go through for their children. During many points in the movie, I teared up, found myself shaking my head in agreement, and also shouting “hell’s yeah!” during one scene where Linda Mitchell (Maya Rudolph) goes all Mama bear to protect her kids. (Truthfully I want to be Linda Mitchell when I grow up.)

But all of the characters in the show are hilarious and totally relatable. Katie also has a younger brother, Aaron Mitchell (voiced by the director of the movie Mike Rianda) who loves dinosaurs, and looks up to his sister. Besides the Mitchells, who are quirky yet a very normal family, you have the Posey family. Hailey (Chrissy Teigen), Jim (John Legend, and Abby (Charlyne Yi) are a representation of the “perfect family” that Linda compares her family to. (Again, 100% relatable.) Throw in hilarious robots and the even more hilarious the Mitchell family dog Monchi it just makes an amazing movie.

My utmost favorite part of The Mitchells vs The Machines though is the animation, and that is for a number of reasons. The first is the added drawings that come from Katie Mitchell’s imagination throughout the movie. For my kids, sometimes in animated movies, it is hard for them to fully get the emotion the animators are trying to evoke in a scene. But with all of Katies added drawings like the hearts or broken hearts my kids were able to understand right away what she was feeling. It drew them into and connected them to the movie more.

The second is how the movie was animated. Sony Pictures Animation brought us Spider-Man Into the Spider-verse and The Lego Movie. Both hits with phenomenal animation. They also did The Mitchells vs The Machines, and again the animation is phenomenal. The animation pops, and it’s as if no matter what direction or angle you look there is something new to see. It’s layered, colorful, unique, and unlike any other animated movie, I have seen.

My rating, and is it ok for kids?

I cannot say enough about how much I love The Mitchells vs The Machines. The movie will make you laugh, cry, shout with joy, and when it’s over you will want to watch it again. Throw in the animation is spectacular, and the choice of voice actors is spot on, and you’ve got a hit movie. Because of this, I give the movie an A+. I highly recommend it.

The Mitchells vs The Machines is rated PG, but is the movie ok for kids? Yes, but if you have sensitive kids they may get slightly scared during some parts of the movie. During the mall fight and the main fight near the end of the movie, things get a little dark, and violent.

How excited are you for The Mitchells vs The Machines? Let me know in the comments!

From the humans who brought you the Academy Award-winning Spider-Man: Into The Spider-Verse and The LEGO Movie comes The Mitchells vs. The Machines, an animated action-comedy about an ordinary family who find themselves in the middle of their biggest family challenge yet…saving the world from the robot apocalypse. No big deal, right? It all starts when creative outsider Katie Mitchell is accepted into the film school of her dreams and is eager to leave home and find “her people,” when her nature-loving dad insists on having the whole family drive her to school and bond during one last totally-not-awkward-or-forced road trip.

But just when the trip can’t get any worse, the family suddenly finds itself in the middle of the robot uprising! Everything from smart phones, to roombas, to evil Furbys are employed to capture every human on the planet. Now it’s up to the Mitchells, including upbeat mom Linda, quirky little brother Aaron, their squishy pug, Monchi, and two friendly, but simple-minded robots to save humanity.

The Mitchells vs. The Machines Trailer

If you are looking for another great family-friendly movie to watch make sure you check out my review of Netflix’s YES DAY HERE.

The Mitchells vs The Machines Movie Review
FacebookTweetPin