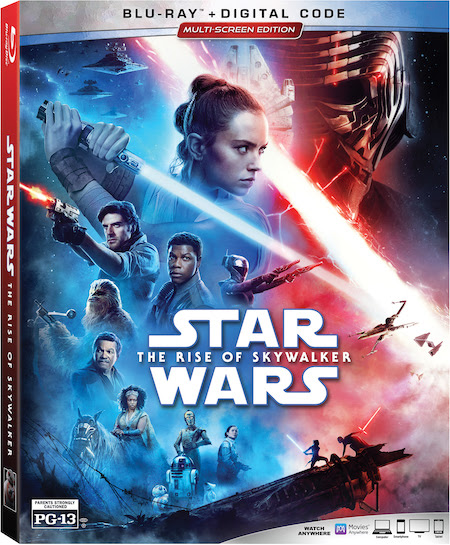 The end of an era

I love Star Wars, and I have seen all of the movies. Even though the franchise and movies have gone through changes and some movies are better than others I still watch them. I will always watch them, and I cannot wait to watch them with my girls when they are old enough. So, if you are like me then get excited because Disney has decided to release Star Wars: The Rise of Skywalker on digital early! If you have not read my review of the movie yet you can click HERE to read all about why I believe the ending of the Skywalker story will divide fans. Continue reading below to see what bonus material will be included in the digital/DVD releases.

Over two hours of bonus material includes a feature-length, making-of documentary and behind-the-scenes access to the cast and filmmakers who brought the epic scenes and characters to life

Bonus material includes a feature-length, making-of documentary, which goes behind the scenes with the cast and filmmakers from Star Wars: The Rise of Skywalker and explores the legacy of the Skywalker saga. Bonus features also dig into the film’s Pasaana desert scenes, including the thrilling landspeeder chase, and the ship in which Rey discovers family secrets as well as a new little droid named D-O. Plus, fans will hear from Warwick Davis, who reprises his role as Wicket the Ewok, as well as the creature effects team that created a record 584 creatures and droids for the film. Digital consumers will receive an exclusive feature highlighting legendary composer John Williams, who has scored every episode in the Skywalker saga.

Disney has also release Frozen 2 to Disney+ 3 months early. You can read my review of Frozen 2 HERE.

Star Wars: The Rise of Skywalker On Digital NOW
FacebookTweetPin