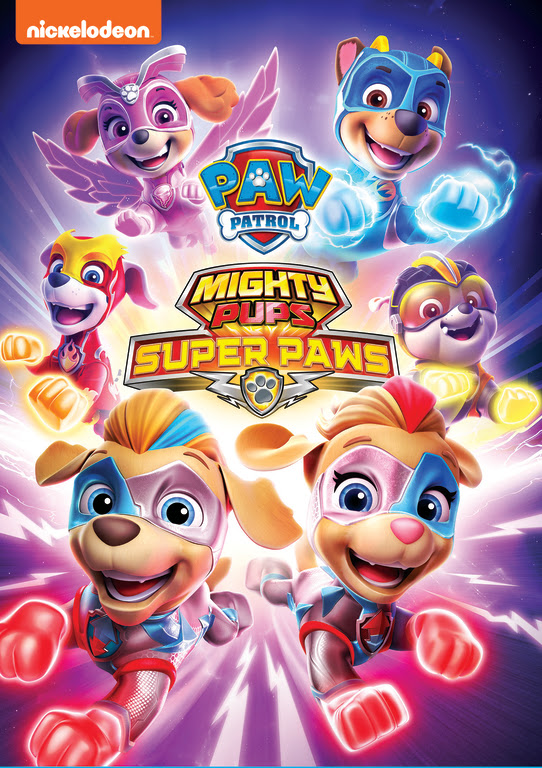 I have been watching Paw Patrol for around 4 years with my kids. (Yes, I also sometimes watch Paw Patrol by myself. Haha!) As a first responder family, we love to watch the adventures of all the Paw Patrol pups. Chase, Everest, and Marshal are the favorites in our house though. Now the pups are supercharged! Even the kittens are supercharged! There are new bad guys and even new tag lines. You can check out all the information below about the new PAW Patrol: Mighty Pups Super Paws DVD along with a pup-tastic snack recipe and Paw Patrol chore chart!

Disclosure: My family and I were gifted a copy of the Paw Patrol: Mighty Pups Super Paws by Nickelodeon and Paramount Home Entertainment all thoughts and opinions are my own.

The pups are ready for MORE mighty action in these six Mighty Pups Super Paws episodes, including two double missions! Havoc takes over the town as the Mayor and the Kitty Catastrophe Crew receive these new superpowers, causing super problems! Then the pups and their new Mighty Twin friends save the town’s treasures from a new super-bandit villain named Ladybird! It’ll take the Mighty Pups and their Super Paws to stop them and restore order to Adventure Bay! Plus, everyone gets a BIG surprise when Chickaletta gets mighty powers too!

The Paw Patrol works hard to keep Adventure Bay safe so I am sure they get hungry after their missions. Make your own snacks you can eat while watching the new Paw Patrol Mighty Pups Super Paws DVD with this delicious Pup-Tastic Recipe! Click below to download, and get baking! (The best part about the snack is it is easy enough your little one can help make it!

Make chores super fun for your Paw Patrol fan with this pup-tastic printable twist on a chore chart. You can print one out for every week or laminate it so you can reuse it!

Looking for another kid-friendly movie the whole family can watch? Then check out my post on the Playmobil the Movie HERE!