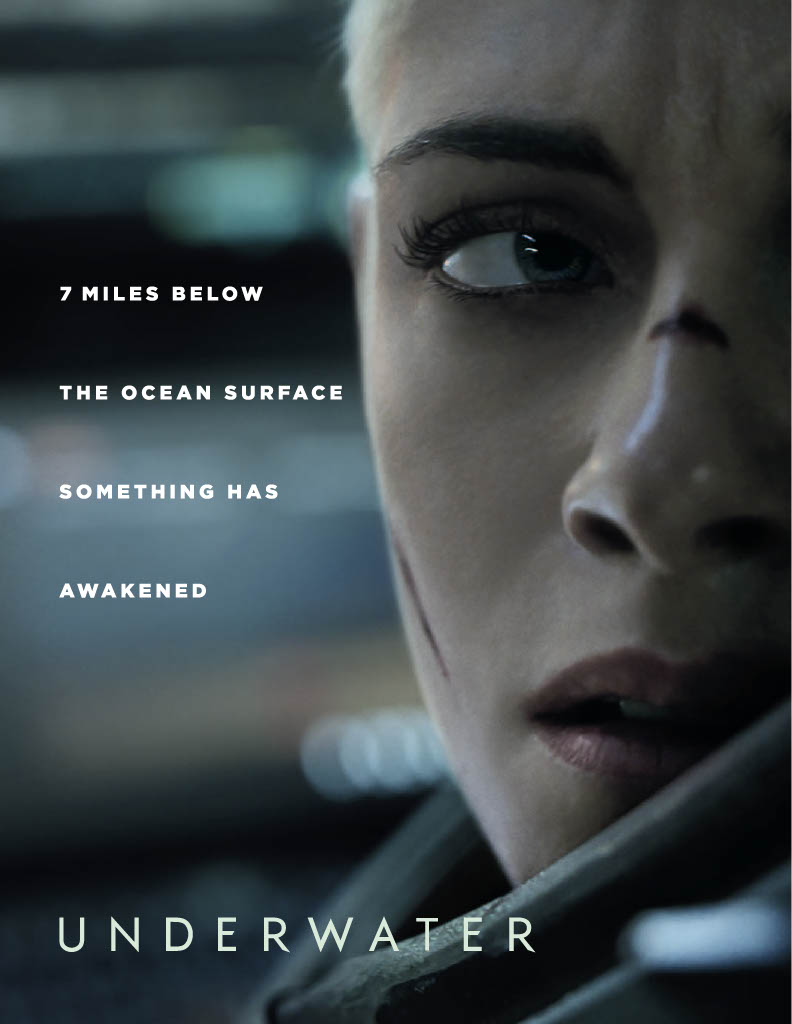 Underwater Reminds Me Why I Don’t Go In The Water…

What do you get when you take an outer space alien movie and move it to the bottom of the ocean? You get a movie that reminds me why I don’t like to go into any body of water I cant see-through. Haha! In January 20th Century Studios released Underwater. The movie is helmed by Kristen Stewart, but does the movie sink or swim? Here is my Underwater Movie Review. FYI, there may be ever so slight spoilers in this review.

I have wanted to see Underwater since I saw the previews. I am not a big Kristen Stewart fan, but the movie concept intrigued me. To me, it came across as an underwater version of Alien and I love those movies, but Kristen Stewart isn’t Sigourney Weaver so I was a little hesitant. I will admit while watching the movie I did jump at some spots, but it definitely had its good parts and meh parts.

I loved the concept of the movie. People trapped miles below the surface in a research/drilling rig, mysterious creatures picking them off one by one, and difficult decisions needing to be made by the characters while they fight for their lives. Sounds great! Even better I am slightly afraid of water. (Mostly water I cannot see through.) So the movie was extra suspenseful for me. Some parts of the story left me thinking, which I like. (“Why did they do it this way? Why did that character do that?) I feel a decent movie will keep you thinking about it even after it is over. Lastly, I actually liked Kristen Stewart in Underwater. I think maybe she has found her niche in action movies.

The character development just wasn’t there. The movie jumps right in on the action which I like, but with no character development. (Even with the aquatic monsters.) The viewer just doesn’t really become invested in the characters. This makes their deaths less impactful. (More of a “whelp they just died.” instead of an “Oh No! No! They just died! Why?!”) Even when they caught one of the creatures the movie didn’t focus enough on the discovery to make the creatures scarier. Another issue I had with the movie is they did not use their amazing cast. They had great actors like T.J. Miller and Vincent Cassel, but instead of focusing on those characters, they focused on others. Lastly, I am sad they set the movie up in a way that there will probably not be a prequel or a sequel. If they had tweaked the story ever so slightly they could have set themselves up for one. (And I would have watched it.)

In the end, Underwater treads water, and I give it a C rating. The movie had so much potential, and because of that, it makes me think of ways it could have been pushed into that good movie category. Is Underwater worth renting? Yes. Is it worth purchasing? If you are a fan of Kristen Stewart then yes! Underwater is rated PG-13 and is available now on DVD, digital download, and for rent.

Kristen Stewart gives a powerful performance in this action-packed sci-fi thriller. The crew of the Kepler undersea mining rig knew there would be hardships on their current mission, but nothing prepared them for the terrors they’re about to face. The heart-stopping adventure begins when a devastating earthquake damages the rig, including its communication devices and escape vehicle. Although quick-thinking mechanical engineer Norah Price (Stewart) manages to temporarily stave off imminent disaster, the need to evacuate escalates quickly. Their only hope is to walk across the ocean floor to an abandoned vessel, in hopes that its communication equipment still works. As if their journey isn’t treacherous enough, they begin to sense that they’re not alone in the murky ocean depths. Also starring Vincent Cassel, Jessica Henwick, John Gallagher Jr., Mamoudou Athie and T.J. Miller, Underwater is a chilling, suspenseful adventure that’s filled with nonstop action from start to finish.

If you are not a fan of horror/suspense movies and are looking for another 20th Century Studio’s movie make sure you check out my review of Spies in Disguise HERE.

Underwater Movie Review: Does it Sink or Swim?
FacebookTweetPin