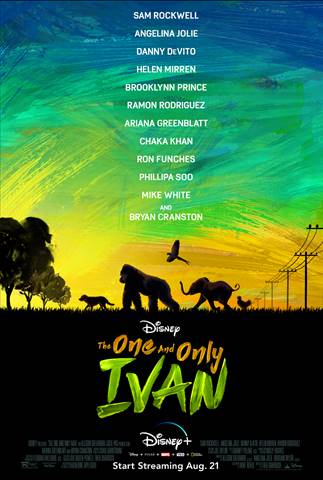 No Comments on The One and Only Ivan Review and Activity Pack!Crafts, Entertainment, Movie Reviews prettyinbabyfoodAugust 25, 2020August 25, 2020disney, Disney+, movie review
FacebookTweetPin

Disney is at it again!

Before Disney+ launched I was one of those people willing to signup for a multi-year subscriber deal. I knew the old Disney movies alone would make the purchase worth it, but I was also hoping for some great original content as well and Disney has delivered. The One and Only Ivan is Disney’s newest original movie to start streaming on Disney+, but is it good? You can check out my review of The One and Only Ivan below and also grab an activity pack for your next movie night!

I feel like I have watched a lot of movies about the circus recently, but oh, my goodness I loved The One and Only Ivan. I could watch the movie over and over. During the movie I laughed, I cried, and I rooted for Ivan and all of the animals. I did not read about the movie before watching it, and so I had a lot of fun listening to the voice actors and trying to pinpoint who they were. The One and Only Ivan stars some heavy hitters such as Sam Rockwell, Angelina Jolie, Danny DeVito, Helen Mirren, Chaka Khan, Mike White, Ron Funches, Phillipa Soo, and Bryan Cranston.

Usually, in a movie I have certain specific characters/actors who I think stole the show, but in the One and Only Ivan all of the characters and actors did such a phenomenal job I cannot pick just one or two. I loved them all, and they all worked together so well. I am also blown away by the CGI animals in the movie. (Some may not agree, but that’s ok. Agree to disagree. Haha!) There have been some movies released to Disney+ where the CGI is pretty bad, but I have to hand it to Disney because they did a fantastic job with the CGI in The One and Only Ivan.

As for the story…

It hits slightly close to home for me. Going to the Circus as a child has always been a fond memory. I remember going to the circus in Wisconsin with my Grandparents and also taking my nieces to the circus when they were very young. But I also remember when I started to question the use and treatment of circus animals when I got older. So, while the story for The One and Only Ivan is slightly predictable it is still a heartwarming tear-jerker of a movie. Covering a topic that we need to continue to discuss.

To help celebrate the release of The One and Only Ivan Disney put together an amazing Activity pack inspired by the movie. In it are educational games and information to help you learn about Gorillas, and how you can help save the Gorillas. You can download the activity pack HERE.

An adaptation of the award-winning book about one very special gorilla, Disney’s THE ONE AND ONLY IVAN is an unforgettable tale about the beauty of friendship, the power of visualization and the significance of the place one calls home. Ivan is a 400-pound silverback gorilla who shares a communal habitat in a suburban shopping mall with Stella the elephant, Bob the dog, and various other animals.

He has few memories of the jungle where he was captured, but when a baby elephant named Ruby arrives, it touches something deep within him. Ruby is recently separated from her family in the wild, which causes him to question his life, where he comes from and where he ultimately wants to be. The heartwarming adventure, which comes to the screen in an impressive hybrid of live-action and CGI, is based on Katherine Applegate’s bestselling book, which won numerous awards upon its publication in 2013, including the Newbery Medal.

Looking for other great Disney+ content? Make sure you read my reviews for Onward HERE and Togo HERE.

The One and Only Ivan Review and Activity Pack!
FacebookTweetPin