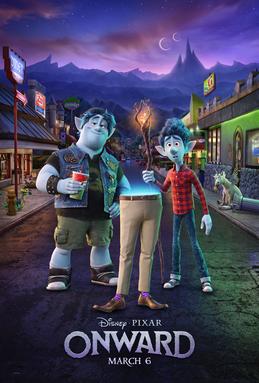 I will be honest with you. I am a fan of Pixar movies. (I mean let’s be real I did grow up in the Toy Story Movie generation. Haha!) Now, having said that I am going to be upfront with you in regards to my review of Onward. Some Pixar movies are better than others, and there are some I didn’t like very much. So, here is my spoiler-free review of Pixar’s new movie Onward.

Set in a suburban fantasy world, Disney and Pixar’s “Onward” introduces two teenage elf brothers (voices of Chris Pratt and Tom Holland) who embark on an extraordinary quest to discover if there is still a little magic left out there.

Pixar movies always take you on a journey of emotion throughout the movie. You laugh, you cry, you laugh again, and then usually at the end of the movie you feel good. Onward is no different, but it feels different from other Pixar movies. Instead of a kid’s movie, Onward feels more like it was made for adults. (Which I am ok with because not every animated movie needs to be made for kids.) Of course, the animation of Onward is epic and the movie has some amazing voice talent, but it’s the story. Onward deals with a very heavy subject, and that is the loss of one’s parent, and how kids cope with that loss. (Hence the name Onward.)

Those who grew up playing Dungeons and Dragons or RPG’s will be highly entertained by Onward. (Onward also slightly reminds me of Weekend at Bernie’s Haha!) Plus parents will be able to relate and see themselves in the mom’s, Laurel Lightfoot (Julia Louis-Dreyfus), shoes. (I mean heck, I have the same sweater she wears in the movie. Haha!) They will also be able to fully understand the situation that the brothers, Ian and Barley Lightfoot (Tom Holland and Chris Pratt), find themselves in.

I actually like the way the movie deals with the heaviness of the story. The concept of how far you would go to see a loved one again even just for a day is not new. But the realization Ian makes about his brother at the end of the movie really struck me. (As an individual with siblings it hit me hard.) I also loved the world they lived in. Not only because I love fantasy worlds, but because it could also be seen as an outward representation of Ian and Barley’s journey.

Personally, I wish they had explored some relationships between Ian and Barley and other characters further. (Mel Rodriguez’s role as Colt Bronco is one of them.) So how would I rate Onward? While not the best movie Pixar has made Onward is also not the worst. I give it a solid B+ and will definitely be purchasing it when it’s available for digital download.

Even though Onward is rated PG I suggest leaving the little ones at home if you are going to see it in theaters. As I mentioned above, personally, I feel Onward is a movie for adults but would also be good for older kids. I would say 9 years and up. There are some parts of the movie that contain action and peril, but not too much. My 4-year-old could watch Onward, but she probably wouldn’t be entertained by it. Younger kids will enjoy seeing the fantasy characters but probably wouldn’t understand or get a lot of the jokes and story.

Will you be going to see Onward in theaters? Once you do let me know what you think of it! Tell me in the comments.

If you are a Disney fan then make sure you check out my review of Frozen 2 HERE.