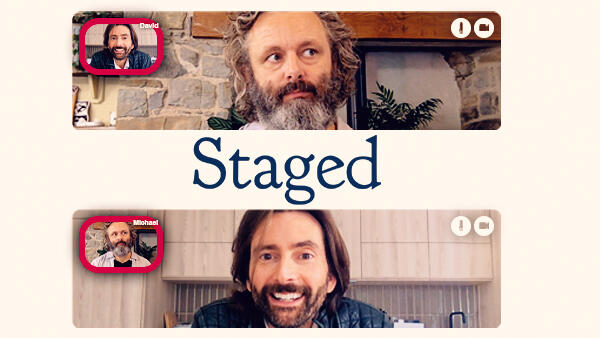 Grab a cup of coffee or tea and get ready to cozy up to watch one of the greatest comedic duo’s spar with each other. David Tennant (Dr. Who, DuckTales, Good Omens) and Michael Sheen (Dolittle, Good Omens, Masters of Sex), are back for BBC’s Staged Season 2! (Happy Dance) If you have never heard of the show, Staged, it is a zoom show that follows David and Michael throughout lockdown. (It’s pretty funny if I do say so. Haha!) With tons of amazing guest stars like Whoopie Goldberg, Simon Pegg, Ben Schwartz, and more BBC’s Staged Season 2 starts streaming on Hulu starting March 16, 2021. (Side note if you have kids: The show does contain adult language such as the F word and so on. So be careful.)

Have you watched Staged before? If you have let me know what you think of the show. If you haven’t I highly suggest watching season 1 first!

David Tennant and Michael Sheen star as two actors whose West End play has been put on hold due to Covid-19, but whose director has persuaded them to carry on rehearsing online. ***You never know who might be popping into the ZOOM – Guest stars this season include Simon Pegg, Nick Frost, Ewan McGregor, Christoph Waltz, Hugh Bonneville, Josh Gad, Jim Parsons, Ken Jeong, Phoebe Waller-Bridge, Cate Blanchett, Ben Schwartz and more.

If you have never seen Staged before here is a brief look!

P.S. STRONG LANGUAGE IS USED IN THE CLIP