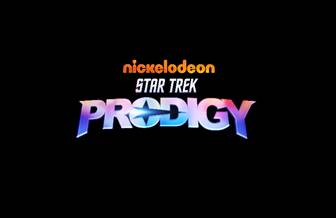 As a parent and a Star Trek fan, I cannot tell you how excited I am for Star Trek: Prodigy. Star Trek: The Next Generation was my introduction to geekiness. It was the show that opened my eyes to Sci-Fi and introduced me to other great Sci-Fi franchises. Now there is another Star Trek show that will hopefully do the same for my kids. I cannot wait to geek out with my kids while watching Star Trek: Prodigy and explain to them how the Star Trek universe is laid out and how all of the Star Trek shows are interconnected. Continue reading below to learn a little more about the new animated show from Nickelodeon and CBS Television Studios.

Nickelodeon and CBS Television Studios today officially revealed the title and logo for its all-new animated series STAR TREK: PRODIGY, which follows a group of lawless teens who discover a derelict Starfleet ship and use it to search for adventure, meaning and salvation. The series is developed by Emmy® Award winners Kevin and Dan Hageman (“Trollhunters” and “Ninjago”) and overseen for Nickelodeon by Ramsey Naito, EVP, Animation Production and Development, Nickelodeon.

Nickelodeon has a ton of new shows coming to its network soon. You can read all about them here! Santiago of The Seas, Baby Shark’s Big Show, The Smurf’s, and Middlemost Post.

(AD) Are You Afraid of the Dark? New DVD! Full di

(Ad/gifted) A super duper huge thank you to @theto

Any Star Trek fan's here?! I am a huge fan and I a

(AD) Since this week is Dino week for our at home

No thats not a picture of a space ship. 🤣 Thats

(Ad) So here is something I was not expecting! Rec

(Ad) Have you seen @scoob yet?! My girls and I lau

(AD) I don’t know about where you live, but it h

Red Shoes and the Seven Dwarfs premieres on digital and on-demand September 18, and on Blu-ray™, and DVD September 22. I just watched the trailer... and I have some thoughts about it. Haha! Click to read my trailer reaction. http://ow.ly/UYDO50ATSUD #lionsgate

The Swan Princess: A Royal Wedding is now available on digital and to rent at Redbox. Click to read my review and to download super cute activity sheets to go along with the new movie! http://ow.ly/olUH50ATzqc #Sonypictures #moviereview #theswanprincess

Any Star Trek fan's here?! I am a huge fan and I am so excited that @Nickelodeon @NickAnimation, and @CBSTVStudios have announced a new series for kids called @StarTrek Prodigy. Click below to learn more about the new kid's show! http://ow.ly/Lxr250ANp47 #nickelodeon #startrek

(AD) I think out of all the @Nickelodeon @pawpatrol DVD’s we have Paw Patrol: Dino Rescue is my favorite. I also may have a new favorite pup in Rex! Click to learn about the new DVD and how you can enter to win your own copy. http://ow.ly/bUJL50AMX7X #nickelodeon #pawpatrol