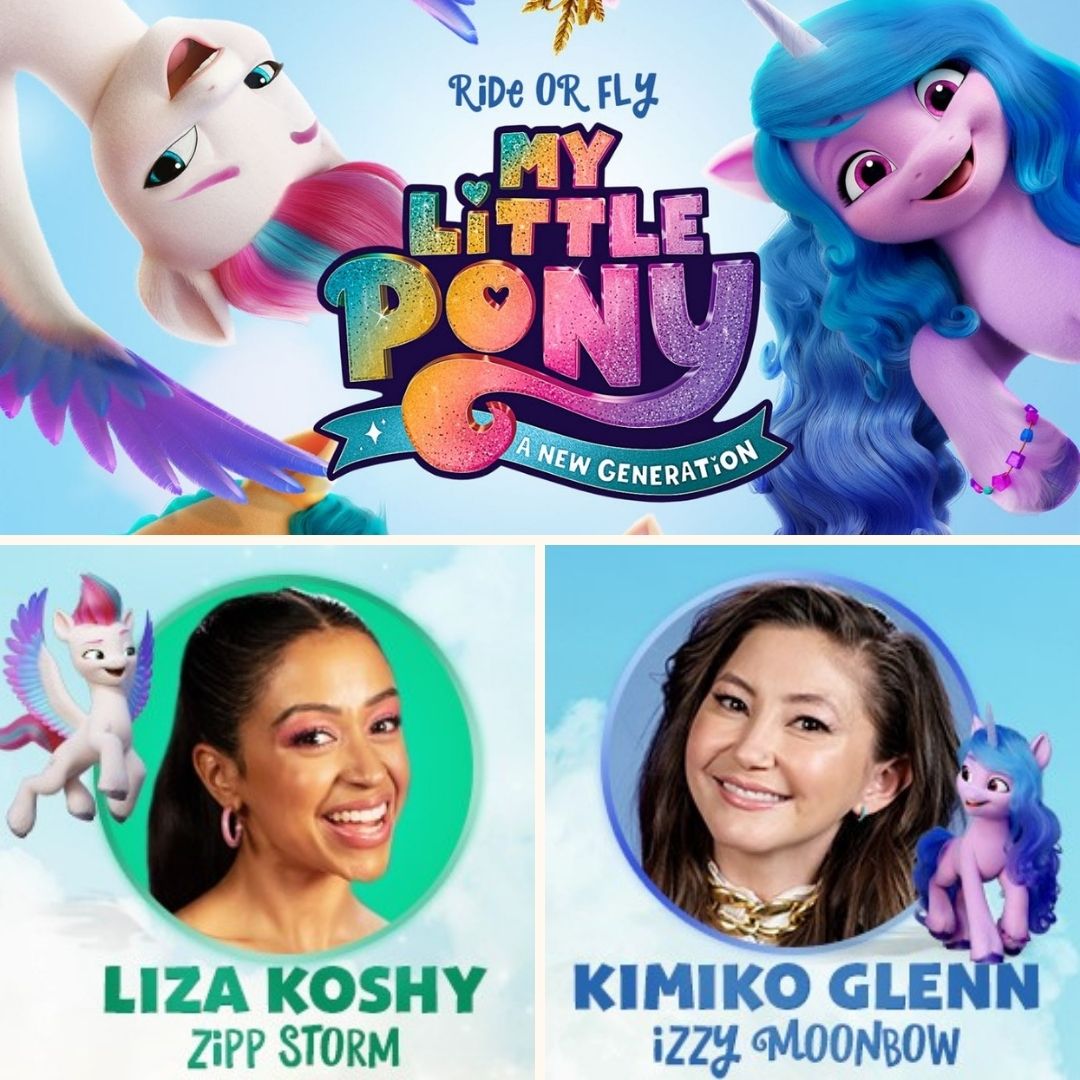 I had a bunch of questions ready that I wanted to ask Kimiko and Liza. But I had one burning question I really wanted to ask them. I asked, How does it feel knowing you are now a part of this huge My Little Pony family, and that you are having such an impact on so many individuals, kids, and adults alike. Liza talked about exactly what My Little Pony: A New Generation is all about. Individuality, diversity, and inclusion, and what she hoped individuals and kids would take away from the movie.

“And in this new generation, you get to see so many. You know, different parts of Equestria to all of these different bubbles of culture in which earth, ponies and pegasi and unicorns come from. So you see the separation in which they’re all living in fear, and then you see this beautiful arc and growth where they lean into the faith and fun and friendship of it all and trust each other. And each other’s voices in each other’s stories and listen to each other, instead of just talk about each other separately in their bubbles. So I wanna see those bubbles be popped and, you know, know that those kids watching are going to be unafraid are going to be curious, are going to be fearless in the sense that we should all, you know, love the differences in one another and embrace that.”

Kimiko Glenn expressed the same sentiment as Liza. But she also touched on a subject, that as a parent, is very important to me. The educational componant of movies and tv shows that kids watch.

“I mean, as someone who does a lot of cartoons, I could do a lot of voiceover, um, which I know reaches a ton of children and like a younger demographic. Um, it’s super important to me and it always warms my heart when I know that there’s an educational component in it and it, because I think there’s so much information out there. It’s like the age of information where like there’s so many ideas being passed around and knowing like, there is a beautiful idea out there, like a beautiful story we can tell and a story that helps educate people, how to kind of you know, not live in fear and to accept one another for our differences and love one another for our differences, it’s super important.”

There is so much more in the interview that Liza and Kimiko talked about. I highly recommend you take a listen!

Listen to the full interview

The interview is audio-only, but I had such a fun time participating. Kimiko and Liza are both such bright lights and it shines through in the interview. You can listen to the whole interview below.

The unimaginable has happened… Equestria has lost its magic! Earth Ponies, Unicorns, and Pegasi are no longer friends and now live separated by species. But idealistic Earth Pony Sunny (Vanessa Hudgens) is determined to find a way to bring enchantment and unity back to their world. Teaming up with open-hearted Unicorn Izzy (Kimiko Glenn), the pair travel to faraway lands where they encounter the likes of charismatic and brave Pegasi Pipp (Sofia Carson) and Zipp (Liza Koshy) and the ever-responsible fellow Earth Pony Hitch (James Marsden). Their mission is full of misadventures, but these new best friends each possess their own unique and special gifts that may be just what this ponyverse needs to restore magic and prove that even little ponies can make a big difference.