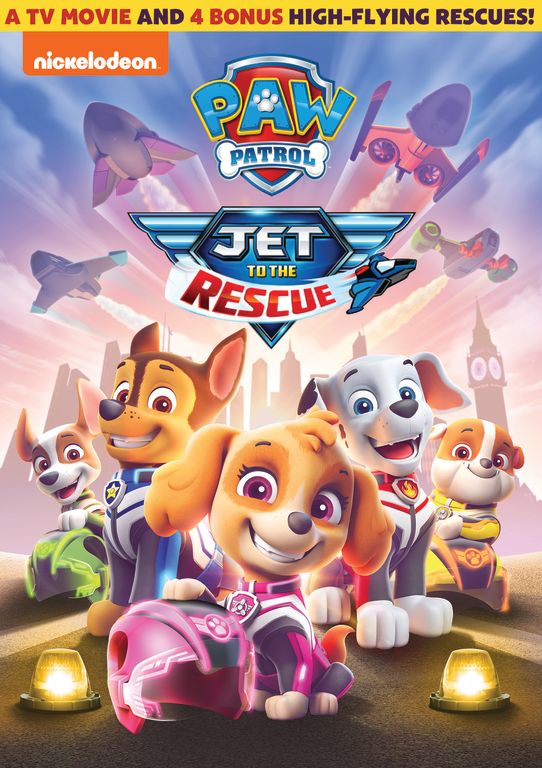 Paw Patrol is on a roll with these new DVD’s!

Paw Patrol has been on TV for a while, and man they just keep getting better! The pups are back with a new DVD called Jet to the Rescue, and you guessed it they have jets! (Seriously these pups have every kind of vehicle you can imagine. Haha!) The new PAW Patrol: Jet to the Rescue DVD will be available from Paramount Home Entertainment and Nickelodeon Home Entertainment exclusively on Amazon on September 3, 2020, and nationally on September 8, 2020. Amazon is also releasing a collection of toys and apparel alongside the new DVD. I have more information about the new DVD and Amazon collection below!

Disclosure: My family and I were gifted a copy of Paw Patrol: Jet to the Rescue from Nickelodeon and Paramount Home Entertainment all thoughts and opinions are my own.

To celebrate the new DVD release of Paw Patrol: Jet to the Rescue I am holding a giveaway where you can enter to win your own copy! Click HERE to enter.

Get ready for high-flying adventures with the PAW Patrol pups in the brand-new DVD PAW Patrol: Jet to the Rescue, featuring an exclusive, all-new original TV movie and four fan-favorite episodes from the number-one ranked preschool show on television, produced by Spin Master Entertainment and airing on Nickelodeon. The DVD release lets fans join the pups as they travel back to Barkingburg with all-new rescue gear and high-speed mission jets for action-packed aerial adventures. The PAW Patrol pups will soar to new heights to save Barkingburg Castle, rescue a stunt pilot, help one of Mayor Humdinger’s kittens, and more!

Get ready to zoom back to Barkingburg with the pups in this all-new TV movie. When the scheming Duke of Flappington steals a powerful levitation gem from the royal castle, it’s up to the PAW Patrol to jet to the rescue before the town is lost forever. Then, join the PAW Patrol for even more high-flying adventures where they’ll save a stunt pilot, one of Mayor Humdinger’s kittens, and even Skye when she breaks her wing flying to Jake’s Mountain.

The Amazon release will coincide with the presale launch of an exclusive toy and apparel collection. The collection will include shirts, deluxe vehicles, and a die-cast vehicle gift pack. Available at www.amazon.com/pawpatrol. This toy/apparel collection is the perfect collection for Paw Patrol Fans!