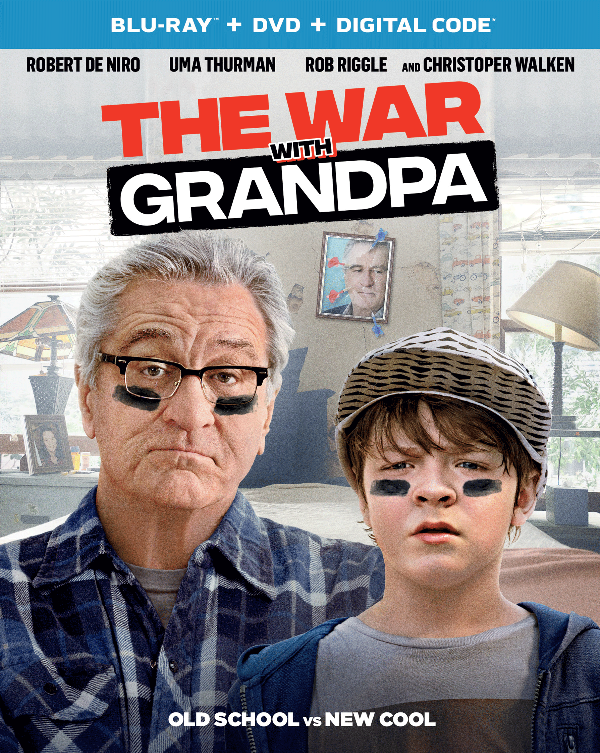 The War is on!

If you are looking for a cute movie that the whole family can watch then make sure to add The War with Grandpa to your family movie night watch list. Then after watching the movie make sure to check out interviews with the cast and crew where you can learn some behind-the-scenes info from The War with Grandpa you. I had the honor of participating and you can click HERE to watch the press junket. We had the amazing opportunity to interview the actor’s Laura Marano, Oakes Fegley, Jane Seymour, Cheech Marin, and the filmmakers/producers Tre, Marvin, and Rosa Peart. The War with Grandpa is out on digital now. Then out on Blu-ray™, DVD, and On-Demand on December 22, 2020. You can find all of the release info below!

The War with Grandpa

Ring in the holiday season and get ready to laugh-out-loud with an all-out prank  battle the whole family can enjoy, in the hilarious comedy, THE WAR WITH GRANDPA, now available to own for the first time on Digital on December 15, 2020 and on Blu-ray™, DVD and On Demand on December 22, 2020 from Universal Pictures Home Entertainment.

Based on Robert Kimmel Smith’s multi-award-winning beloved children’s book of the same name, the film follows a series of escalating shenanigans that ensue when a grandfather (Academy Award® winner Robert De Niro, The Irishman, Meet the Parents franchise) moves in with his daughter, forcing his grandson (Oakes Fegley, The Goldfinch, This Is Where I Leave You) to begrudgingly give up his bedroom. Packed with heart and hysterical hijinks from start to finish, THE WAR WITH GRANDPA is the perfect “family-friendly comedy” (Pete Hammond, Deadline) everyone can enjoy during the holiday and beyond.

Sixth-grader Peter (Fegley) is pretty much your average kid—he likes gaming, hanging with his friends and his beloved pair of Air Jordans. But when his recently widowed grandfather Ed (De Niro) moves in with Peter’s family, the boy is forced to give up his most prized possession of all, his bedroom. Unwilling to let such an injustice stand, Peter devises a series of increasingly elaborate pranks to drive out the interloper, but Grandpa Ed won’t go without a fight. Soon, the friendly combatants are engaged in an all-out war with side-splitting consequences.

It's a short films kinda day! 😍 I love short films so I have been looking forward to this all week. I am watching Shorts for TOTs, Short Film's 1, Girl's POV, and Heebie Jeebies today at @NYICFF (Happy Dance.) #nyicff

City of Ghosts is out today and it is a must watch! You can read my full review and interview with creator Elizabeth Ito -> https://prettyinbabyfood.com/2021/03/04/city-of-ghosts-review-and-interview/ #netflixfamily #cityofghosts

The #WandaVisionFinale was exceptional. A HUGE shoutout to everyone who worked on #WandaVision. You made an amazing piece of Marvel art, and brought to life a love story in Wandavision that, to me, rivals the greatest love stories ever told. ❤

Tomorrow @DisneyRaya will be released in select theaters & available on @disneyplus with Premier Access! Is it appropriate for younger kids? And is it worth $29.99 to watch on Disney+? #DisneyRaya #DisneyPlus
https://bit.ly/3kL7CW9