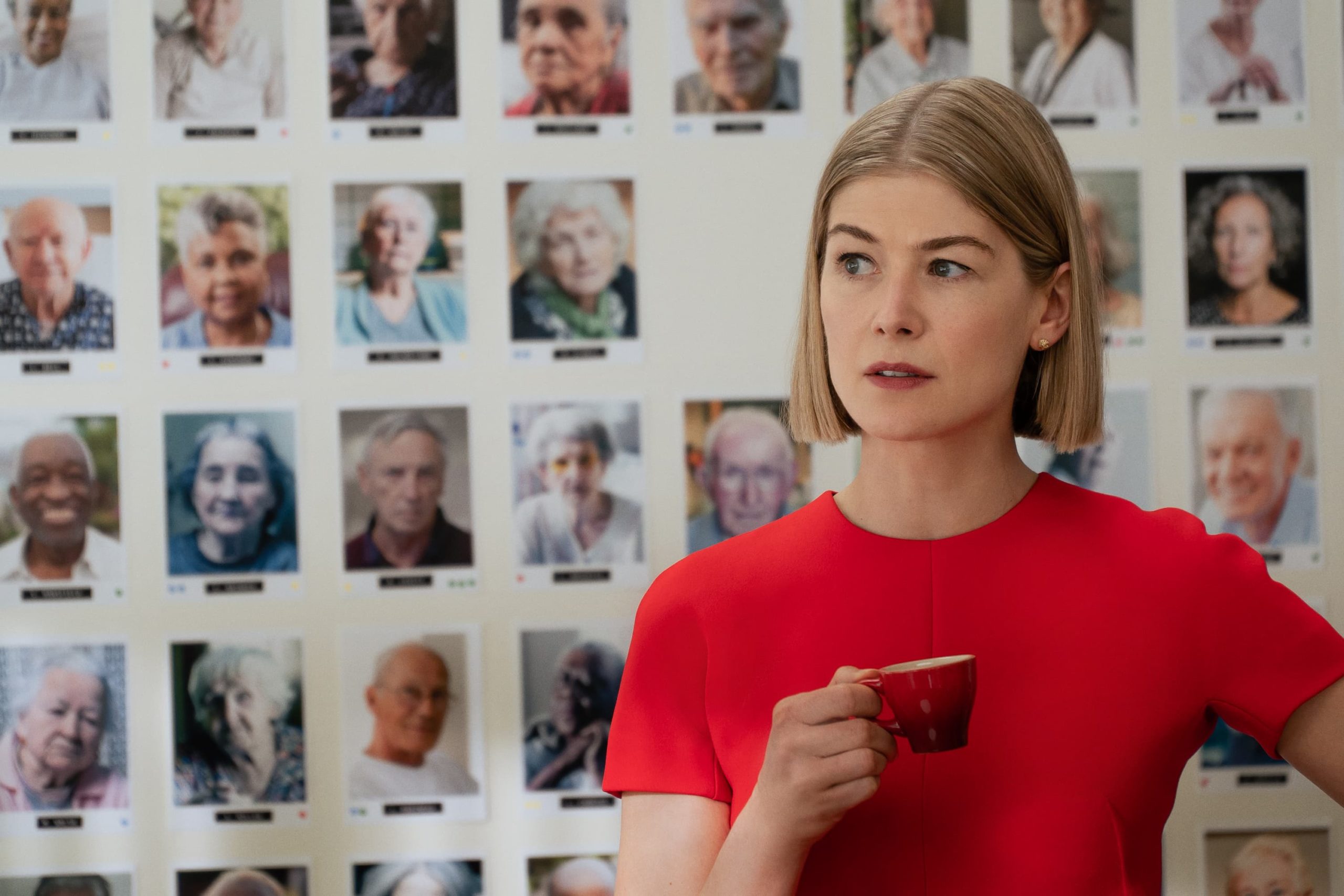 She cares a lot…or does she?

Haha! Netflix just released a new movie called I Care a Lot, and it is devious. I don’t normally put disclaimers before a movie, but if elder abuse is a trigger for you then I Care a Lot is probably not a movie you will want to watch. Otherwise, I Care a Lot is an evilicious movie with a spectacular cast. I Care a Lot is out on Netflix now. Here is my I Care a Lot review!

My I Care a Lot Review

I love Rosamund Pike and the movie I Care a Lot is just another reminder of why. Rosamund just has a way about her. Her facial expressions, or sometimes lack thereof, are amazing, and she just does a fantastic job playing strong clever women. In I Care a Lot Rosamund plays Marla, a woman who is a professional guardian, but in reality, she is a con artist. She pretends to care for others when in fact her character only cares for herself. She has older individuals deemed unfit to care for themselves, puts them in old folk’s homes, and then takes their money. (The sad part is there are actually people like this out in the world.) One day she thinks she has found the perfect individual to add to her client list, but little does she know she messed with the wrong old lady, Jennifer (Dianne Wiest).

The premise behind I Care a Lot is good, and from the get-go the way it draws you in is perfect. It plays to your emotions and you want to hate Marla’s character, but you end up sort of admiring her gumption and drive. I have three qualms with the movie though. The first is the pace of the movie. I Care a Lot is almost 2 hours long, and unfortunately while watching, it seems to go on for much longer. There are large chunks of the movie that I feel could have been shortened or filled with more action. My second qualm is a majority of the characters just don’t seem to understand the concept of making sure the “job” is done. It was frustrating to watch. Haha! (I mean how do gangsters not know how to wack people correctly?!)

Rosamund Pike shines in I Care a Lot and gives the standout performance, but Roseamun isn’t the only big actor in the movie. I Care a Lot also stars Dianne Wiest, Peter Dinklage, Chris Messina, and Eiza González. Dianne Wiest was the perfect choice to play Jennifer, and when Dianne evil laughed and called Rosamund’s character a name I got chills down my spine.

An actor I was excited to see in the movie was Chris Messina. He plays the lawyer Dean Ericson and says one of the funniest lines in the whole movie about family court. I wish he had been in the movie more. Going back to my qualms about the movie though. My third qualm has to do with Peter Dinklage’s character Roman. Peter Dinklage is such an incredible actor, but I feel he was not used to his potential in I Care a Lot. I wanted and was hoping for more from him.

I really wish I Care a Lot had gotten more press. It is a fantastic movie. I give I Care a Lot an A-. If the movie didn’t have the parts that felt like they dragged on and had slightly more action I think it would have elevated it higher. Still definitely worth a watch for the story and for Rosamund Pike’s performance.

If you read this I Care a Lot review and then watched the movie I would love to know your thoughts. Let me know in the comments!

Poised with sharklike self-assurance, Marla Grayson (Academy Award nominee Rosamund Pike) is a professional, court-appointed guardian for dozens of elderly wards whose assets she seizes and cunningly bilks through dubious but legal means. It’s a well-oiled racket that  Marla and her business-partner and lover Fran (Eiza González) use with brutal efficiency on their latest “cherry,” Jennifer Peterson (two-time Academy Award winner Dianne Wiest) — a wealthy retiree with no living heirs or family. But when their mark turns out to have an equally shady secret of her own and connections to a volatile gangster (Golden Globe winner Peter Dinklage), Marla is forced to level up in a game only predators can play — one that’s neither fair, nor square.

I Care a Lot Review: Out on Netflix Now
FacebookTweetPin

It's a short films kinda day! 😍 I love short films so I have been looking forward to this all week. I am watching Shorts for TOTs, Short Film's 1, Girl's POV, and Heebie Jeebies today at @NYICFF (Happy Dance.) #nyicff

City of Ghosts is out today and it is a must watch! You can read my full review and interview with creator Elizabeth Ito -> https://prettyinbabyfood.com/2021/03/04/city-of-ghosts-review-and-interview/ #netflixfamily #cityofghosts

The #WandaVisionFinale was exceptional. A HUGE shoutout to everyone who worked on #WandaVision. You made an amazing piece of Marvel art, and brought to life a love story in Wandavision that, to me, rivals the greatest love stories ever told. ❤

Tomorrow @DisneyRaya will be released in select theaters & available on @disneyplus with Premier Access! Is it appropriate for younger kids? And is it worth $29.99 to watch on Disney+? #DisneyRaya #DisneyPlus
https://bit.ly/3kL7CW9